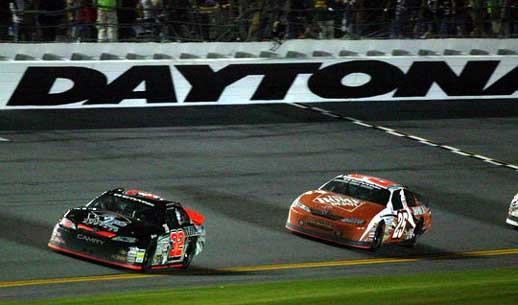 Every year, the ARCA Racing Series presented by Menards kicks off Daytona Speedweeks with their 200-mile event at the “World Center of Racing.” The Lucas Oil Engine Treatment 200 serves as the appetizer to Saturday night’s Advance Auto Parts Clash for the Monster Energy NASCAR Cup Series.

ARCA began running on Daytona’s high banks in 1964 and have continued to do so up to the 54th running on February 18. The cars and stars of the race change every year but one thing that hasn’t is the victorious driver going toDaytona’s famed Gatorade Victory Lane where racing giants have visited since the track opened in 1959.

Nelson Stacy won the inaugural race at DIS as the first driver ever to do so at the 2.5-mile track. Some have followed in his footsteps achieving the same feat, so let’s take a look at other drivers who ended up in victory lane on their first try.

Kenny Irwin Jr. never raced at Daytona International Speedway until running the FirstPlus Financial 200 in an old Robert Yates Racing Ford Thunderbird. Looking similar to one of Dale Jarrett’s car, Irwin qualified outside pole in his restrictor-plate debut and led a race-high 41 laps in the event. There was veteran experience behind him in Mike Wallace who won an ARCA race there before driving for Ken Schrader. At the time, Wallace dipped down occasionally into the series to run the superspeedway events and lurked behind the RYR driver in second. Irwin survived a wild final lap when third-place Frank Kimmel got loose and tagged Mike Ciochetti in the last turn as the wreck ensued behind him to score the victory in his first-ever attempt at DIS. The Winston Cup Series rookie went on to run the full 1998 season in the No. 28 Texaco-Havoline Ford for RYR.

David Keith was already an ARCA winner heading into Speedweeks 2000. Keith stormed to the front without third gear in the closing laps at Michigan the year before and made the winning pass on the late Blaise Alexander with two laps to go. So the Kentucky native knew how to get the job done but a bigger task was at hand at a restrictor-plate track. Keith came into the pits too hot and got in the grass but still made time while doing so. While leader Kirk Shelmerdine’s crew had trouble with their pit stop, a wreck ensued to bring out the caution and shuffle the running order. Once everything got sorted out, defending race winner Bobby Gerhart inherited the lead yet to make a stop. Timing and scoring showed Keith as the leader but Gerhart’s crew disagreed. Amidst controversy, the Owensboro, Kentucky native held off several changes to win in his first trip to Daytona. Keith also won the fall Talladega race that year as the last driver to sweep both restrictor-plate races in a season. Kirk Shelmerdine won his second-consecutive Daytona pole in a Ford this time. A third-generation Hendrick driver named Ricky lined up alongside the former championship-winning crew chief who beat his dad’s teams for the Cup titles. Around the half-way mark, Ricky Hendrick grabbed the lead after pit stops and held the top spot in his No. 71 GMAC Chevrolet. Jeff Gordon assisted the younger Hendrick throughout the race before running the Truck Series event there a week later. Hendrick missed a shift with 12 laps to go allowing Penske driver Ryan Newman and several others get by and the chance of victory for the 20-year-old slip away. While drivers ran side-by-side behind the top-two, Newman was ahead of the series’ most recent winner Bob Strait in the closing laps but there was no challenge from Strait as Newman ended up victorious in the No. 27 Alltel Ford. Daytona was part of an A[ARCA], B[Busch] and C [Cup] schedule Newman ran throughout the 2001 season while also scoring his first career Busch Series win at Michigan that August.

An 18-year-old Kyle Busch took to Daytona’s high banks for the first time in February 2004. After scoring two ARCA wins in 2003, Busch made his restrictor-plate debut at Talladega that fall before getting caught up in the “Big One.” Busch had another crack at a win in his No. 87 Ditech Chevrolet at DIS. On lap 20, the No. 25 Nextel Cup Seires pit crew made a gaffe when one of Busch’s members went over the wall without a firesuit, serving a one-lap penalty for the infraction. But, it didn’t slow the Hendrick hotshoe down. Eight laps later, Busch got his lap back and started his charge back towards the front. Once the No. 87 was back out front, it was for good on lap 61 when he passed defending series champ Frank Kimmel for the lead and led a five-car pack to the finish. Kimmel’s bid at the elusive Daytona win came up short again as Busch celebrated in victory lane as the first winner of Speedweeks 2004.

Michael Annett was no stranger to plate racing going into Daytona that February. He won the series’ previous superspeedway race at Talladega in fall 2007 holding off newcomer Colin Braun and Frank Kimmel in the final laps. Bill Davis Racing had an ARCA program along with their Cup and Truck stuff but had young drivers in the mix. Annett won his BDR debut and looked to make it a second-straight series victory in his No. 28 Pilot Travel Centers Toyota. The “Big One” happened on lap 29 when Kyle Krisiloff cut off Justin Marks triggering a 14-car pileup also knocking out Red Bull Racing driver Scott Speed after leading 16 laps early on. The Toyota camp proved to be strong in 2008 as Annett assumed the lead on lap 49 and never looked back for the victory in his first Daytona trip. He ran a part-time Truck Series schedule with BDR along with select ARCA events the rest of the season.

Two 18-year-olds fought it out for the 2009 running of the Lucas Oil Slick Mist 200, the Toyota duo of James Buescher and Joey Logano both running the race to get extra track time before the next weekend. Logano fell a lap down after an extra crew member went over the wall without a helmet putting the Connecticut native in a small hole. Seven laps later, the No. 25 Home Depot Toyota was back on the lead lap as Logano set his sights on the lead. While the rookie Sprint Cup Series driver navigated his way through the field, Buescher continued to lead the way. Logano and Buescher were side-by-side for the top spot until Patrick Sheltra came down on Justin Lofton but there was no room as the two made contact. Sheltra went spinning as Larry Hollenback T-boned the No. 60 Sheltra Racing Toyota in a violent crash. It set up a one-lap shootout with Buescher getting a great restart to put the No. 32 WolfPack Rentals Toyota out front and see his challengers in the rear-view. Logano gave it one last try in Turn 3 but to no avail making Buescher the last driver in the ARCA Racing Series presented by Menards to win his Daytona debut.