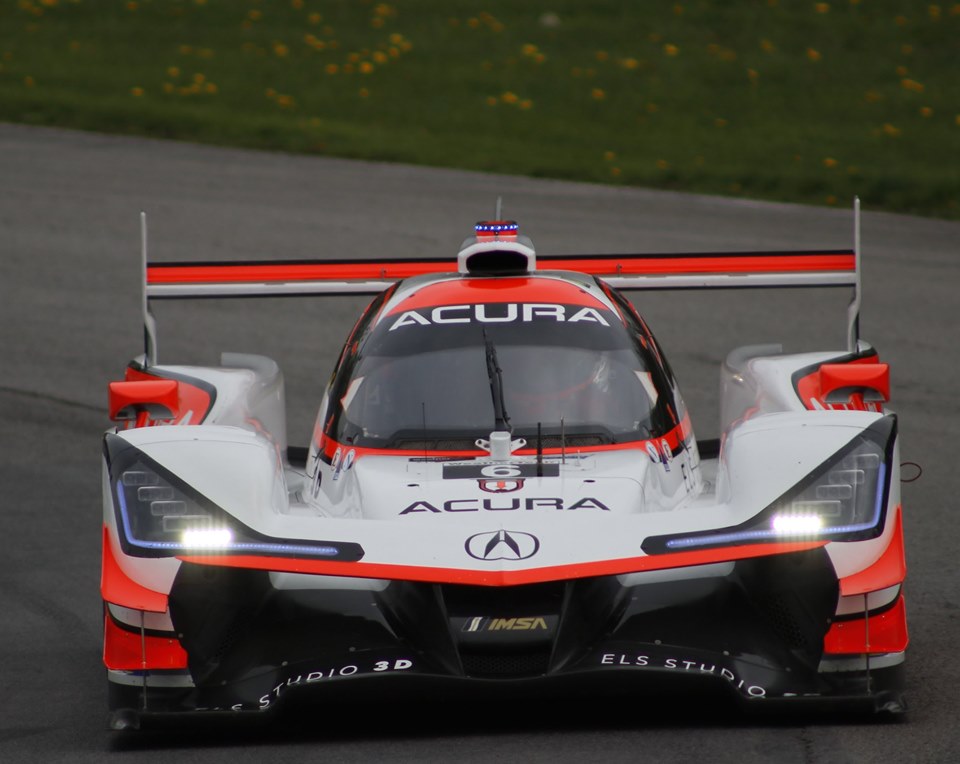 Believe it or not, when the checkered flag flew over Saturday’s Chevrolet Sports Car Classic at Detroit’s Belle Isle Park, it marked the end of the first half of the IMSA WeatherTech SportsCar Championship season for the Daytona Prototype international (DPi) class.
And what an eventful first half it has been, as Saturday’s race reinforced. While the GT Daytona (GTD) cars were not competing for overall WeatherTech Championship points but instead in the second round of the seven-race WeatherTech Sprint Cup season, some trends are beginning to emerge in that class as well as we head toward the summer stretch run.
Here’s our five takeaways from a quick weekend in the Motor City:

Back in the summer of 2017 when the Acura Team Penske DPi program first was announced, most educated observers expected this team to be tough to beat in the WeatherTech Championship. The two-car program showed plenty of strength and speed from its debut race in the 2018 Rolex 24 At Daytona, and at various times throughout the ’18 season.
However, at year’s end, the team had only one win – the Acura Sports Car Challenge at Mid-Ohio Sports Car Course – courtesy of No. 7 Acura ARX-05 co-drivers Ricky Taylor and Helio Castroneves in a 1-2 Acura Team Penske sweep. That undoubtedly surprised many of those same educated observers.
Fast-forwarding to the start of the 2019 season, the team again was a frontrunner and podium finisher – but not race winner – in the first three rounds. But starting with last month’s race at Mid-Ohio, where Dane Cameron and Juan Pablo Montoya successfully defended the team’s 2018 victory with their first win in the No. 6 Acura DPi, and continuing with Saturday’s victory in Detroit by the No. 6 squad, it appears their time might finally be here.
“Think about it, as much preparation as we did, and to take that long to get the first win, it took us about a year to get a win and another year to get a second win as a team, so to actually win back-to-back races it shows how good the preparation was by everybody,” said Montoya, who started Saturday’s race from the pole position. “I’m just excited to win and carry the Acura flag and make everybody feel proud, and on to the next one.”
“We’re in the game, we understand what we need to do,” added Castroneves after finishing third with Taylor in the No. 7 on Saturday. “I think that’s a big part of it.”
The win vaulted Montoya and Cameron into second in the WeatherTech Championship DPi standings, one point ahead of Castroneves and Taylor, who picked up their third podium result in five races this season.

2. But Action Express Racing Still the Team to Beat

Felipe Nasr and Pipo Derani came tantalizingly close to successfully defending the No. 31 Whelen Engineering Cadillac DPi-V.R team’s 2018 Detroit race victory as well as preserving General Motors’ 100 percent winning percentage in Detroit. They missed it by a scant, 0.820 seconds.
But there’s a good reason why Action Express Racing has won all but one WeatherTech Championship title since the series’ inception back in 2014. Even if they don’t win, they finish in the best possible position, which was second on Saturday.
“Congrats to Juan, Dane and Penske, they beat us this time,” said Nasr, who won the 2018 WeatherTech
Championship Prototype title last year as well as the Detroit race with co-driver Eric Curran. “But we’re still pretty good looking after the championship. We extended the lead, so it was a good weekend. Good job by Pipo, everyone on Action Express. The No. 31 Whelen Cadillac keeps in the fight.”
As Nasr mentioned, the No. 31 team did slightly extend its DPi points lead to five, 152-147, in Detroit. The Brazilian knows every point will matter as the season continues.
“I feel the team has done an amazing job so far in every race,” he said. “It’s another podium for us, so that’s how we win championships. If we cannot win the race, we get a second or third place and keep moving forward.”

Eight months ago, AIM Vasser Sullivan was just getting started. On Oct. 16, 2018, the team announced its partnership with Lexus to field two GTD entries. At that time, the team faced a busy offseason of acquiring a race shop, hiring team personnel and getting the entire program up to speed.
Bear in mind, those involved were motorsports veterans. AIM Autosport was a championship-winning sports car program, while Jimmy Vasser and James “Sulli” Sullivan field a successful IndyCar program in partnership with Dale Coyne Racing, but it still was a herculean effort to get the operation off the ground prior to January’s season-opening Rolex 24 At Daytona.
It didn’t take long for the team to rise to the occasion. In Daytona, full-season drivers Frankie Montecalvo and Townsend Bell co-drove the No. 12 Lexus RC F GT3 to a runner-up result with Jeff Segal and Aaron Telitz.
Last month, Jack Hawksworth and Richard Heistand delivered the team’s first victory in the No. 14 entry, successfully defending Lexus’ inaugural WeatherTech Championship victory from the previous year at Mid-Ohio. Hawksworth and Heistand made it two in a row at Detroit on Saturday, while Montecalvo and Bell finished third.
“It was an uphill battle from the get-go,” admitted team co-owner Andrew Bordin. “But I think the management focused on putting a real good team together. We obsessed over quite a few details, but it’s paying off. I’m proud of these guys.”
The win kept the No. 14 team perfect in the WeatherTech Sprint Cup standings, which they lead by 10 over No. 73 Park Place Motorsports Porsche driver Patrick Long.
“All credit to the guys,” Vasser said. “The car’s been flawless, Heistand’s coming around, Hawksworth’s a great championship contender and I’m really proud of Townsend and Frankie in the 12 car to put it on the podium. Two Lexuses on the podium here is just awesome.”
“I think maybe three months ago, it would have been surprising,” added Sullivan. “But I don’t know about three weeks ago. What can you say about the Lexus RC F? We’ve got a win on a road course, we got a win on a street course, so we couldn’t be any more pleased. We’re just really pumped to represent Lexus here and bring home two trophies today. It’s a fantastic day for the brand and the team.”

Park Place Motorsports fielded the lone Porsche GT3 R in the Chevrolet Sports Car Classic with a driver lineup that was not confirmed until just 10 days before the race.
But it turned out to be a really strong weekend for the team. Canadian driver Zacharie Robichon, who won the 2018 Porsche GT3 Cup Challenge Canada by Yokohama championship as well as seven out of eight Porsche GT3 Cup Challenge USA by Yokohama races last year for Moorespeed, was the late addition to the lineup alongside regular team driver Patrick Long.
Robichon was available when his normal team, Pfaff Motorsports, elected to forego the WeatherTech Sprint Cup round with its No. 9 Porsche. He earned the pole position Friday night when a technical infraction on the original pole-winning No. 96 entry elevated Robichon from his original, second-place qualifying result.
Robichon and Long stayed strong in Saturday’s 100-minute race, coming home with a second-place trophy in GTD.
“It was a fantastic weekend with Park Place Motorsports,” Robichon said. “I’ve never raced with Park Place before or raced at Belle Isle, so it was a weekend of firsts for me. Luckily, this wasn’t my first street track and I was able to settle in pretty quickly.”
“I’m really proud of the whole Park Place Motorsports organization,” Long added. “We were at the sharp end of the field all weekend. The racer in me is disappointed and wants a victory for the team, but the realist understands this is where championships are made or lost.”
As mentioned above, Long is currently second in the WeatherTech Sprint Cup standings after two of seven races.

JDC-Miller Motorsports’ pair of top-five results in Saturday’s Chevrolet Sports Car Classic appears to be right on schedule for the Minnesota-based program.
The team finished fourth in the WeatherTech Championship Prototype standings each of the past two years, buoyed by strong midyear performances. On Saturday, Stephen Simpson and Simon Trummer co-drove to a fourth-place result in the No. 84 Cadillac DPi, finishing one spot ahead of Misha Goikhberg and Tristan Vautier, who came home fifth in the No. 85 Cadillac.
“The JDC-Miller Motorsports team did a great job today in the pits,” said Simpson after the race. “We had strong strategy and Simon was awesome in that first stint. I really wanted to get that first podium today [with the team’s new-for-2019 Cadillac DPi] in the WeatherTech Championship. A fourth and fifth place finish today for the team is definitely something to build on. Our objective this year is to move forward every race and we have.”
The next race is the Sahlen’s Six Hours of The Glen on Sunday, June 30. The JDC-Miller team earned its first WeatherTech Championship Prototype victory there last year.
Related TopicsAction ExpressAcura Team PenskeBelle IsleDetroitfrontheaderheadlineIMSAJDC-Miller MotorsportsWeatherTech Sports Car Championship