With three wins in 2022, NASCAR Camping World Truck Series Regular Season Champion Zane Smith seemed to be the man to beat heading into the Playoffs.

However, Grant Enfinger stole the show in the opening round at Lucas Oil Indianapolis Raceway Park. The GMS Racing driver led 13 laps, scored the win, and locked himself into the next round of the Playoffs. Don’t count out experienced veterans when it comes to the NASCAR Playoffs. Grant Enfinger proved this at IRP with a sneaky win to kick off the hunt for the 2022 NASCAR Camping World Truck Series Championship. (Photo: Maddie Skidan | The Podium Finish)

Ahead of Saturday night’s action at Richmond Raceway, a short track where it seems like anything can happen, fans are wondering what other surprises await them in the coming weeks.

With six races left to go before crowning a series champion, let’s look at the contenders, the tracks and their winning facts, and consider who might come out on top in “Locked…and Loading!”

This famed short track in central Virginia has played host to the NCWTS 13 times, providing 10 different winners – two of which are in the Playoffs (Enfinger and Nemechek). Could Enfinger play spoiler two races in a row?

NCWTS Winning Fact: 62% of NCWTS winners at Richmond have come from the top five.

Zane Smith is the most recent winner at this track. However, after 24 races in its history, Matt Crafton has won at this intermediate circuit on three different occasions. Could the 2022 winless ThorSport Racing driver lock himself into the next round with some history lessons?

NCWTS Winning Fact: Two of those three crafty-Crafton wins came from a top 10 starting position, while 67% of all-time winners came from the top five.

Short tracks, short tempers. In 2021, Chandler Smith punched his ticket to the next round of the Playoffs after conquering the World’s Fastest Half-Mile. Currently, he is the only driver in the Playoffs to have won at this fan-favorite track. Will that play to his advantage come September 15?

NCWTS Winning Fact: 83% of BMS winners started in the top 10.

The NCWTS has a short history on this 2.66-mile track and this is another track where Enfinger has taken home the checkered flag. But, if you also look at who is in the mix for superspeedways, well, anyone can have a shot!

NCWTS Winning Fact: Only 56% of ‘Dega winners started in the top 10. This begs the question – get out front and stay there, or hang back and avoid the chaos?

Former host to the season finale, this track seems to race the best at night. However, the Trucks will take on the intermediate at 1:00 P.M. Of the current Playoff drivers, once again, Crafton is the only driver to win in South Florida.

NCWTS Winning Fact: Out of 25 races, only four winners have emerged from outside the top 10.

NCWTS Winning Fact: 74% have come from the top five, with seven from the pole position, including Smith in ‘21. Chandler Smith won the series finale at Phoenix Raceway in 2021, but all eyes were on Series Champion, Ben Rhodes. (Photo: Luis Torres | The Podium Finish)

Recent NASCAR Playoffs have shown that wins do not necessarily equal championships. The 2021 NCWTS finale had non-Playoff contender, Chandler Smith, winning the race while Ben Rhodes was crowned the champion. The next night, in a dramatic turn of events, the NASCAR Xfinity Series saw Daniel Hemric win his first series race and the championship on the same night. This news is bound to be encouraging to those winless drivers. But, the old adage that “winning solves everything” is still true – win and you advance. Keep advancing and your championship odds increase.

Disclaimer: Speaking of odds, I’m not an oddsmaker. (I don’t even like math, despite all of the numbers included in this piece!) So, as we look ahead, let’s look not at the odds, but at the facts.

Without a doubt, experience pays off. Matt Crafton has ‘been there, done that’ numerous times, clinching the Series Championship three times. One has to think that with this experience, he can cast aside the Playoff pressures and advance through the rounds as needed.

On the flip side, ThorSport Racing as a whole only has one win in 2022 (Rhodes, Bristol Dirt). The once dominant team just doesn’t seem to have the get-up-and-go this season.

Fans have to be watching Zane Smith. The Front Row Motorsports driver and his No. 38 team have gelled incredibly well this season. He struggled in the opening race of the Playoffs, but if Z. Smith gets a win, one has to think he will get hot (again) and easily advance to the final round and vie for the championship.

Z. Smith’s toughest competition will likely come from the Kyle Busch Motorsports camp. Twenty-year-old Chandler Smith not only has a championship-caliber team owner, but has a level head and a formidable team surrounding him to get the job done. With two wins this season, he is hot on the heels of Z. Smith.

But, what about those winless drivers of Hocevar and Majeski? It would indeed be fun to see another Hemric-like win come Phoenix. And no doubt, sports fans love a good Cinderella story. But with the way 2022 has gone, it seems like winning is the name of the game.

Two more drivers to call out and consider: Rhodes and Nemechek. No stranger to the sport. Can John Hunter Nemechek shake of the adversity his team has faced in 2022 and be there when it counts at Phoenix? (Photo: Cody Porter | The Podium Finish)

In 2021, Rhodes won the first two races right out of the gate but went winless the remainder of the season – even in the finale. Could he sneak into the final round and pull off a repeat? (At least we know what to expect from the post-race press conference this time!)

And what about Nemechek? The KBM driver has had an attrition-filled season with only one win (compared to five in 2021) and four stage wins. Without a doubt, the third-generation driver knows what he needs to do to advance and be in contention when it counts.

Could we see either of these young Truckers in the hunt come November?

While we’re only one race into the Playoffs, it feels like anyone’s game. However, based on race wins, stage wins, and overall 2022 performance, I would have to say the final four drivers vying for the 2022 NCWTS Championship will be Zane Smith, Chandler Smith, Grant Enfinger, and Ben Rhodes. 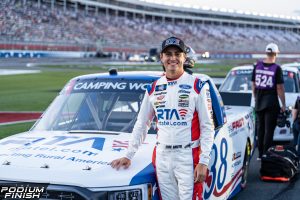 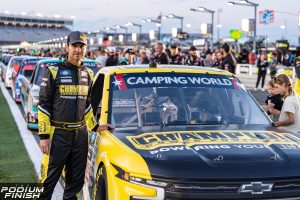 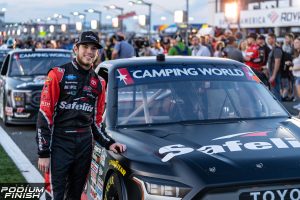 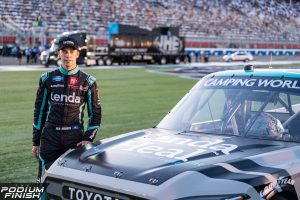 We at The Podium Finish would love to hear your predictions! Drop a comment with your Championship 4!