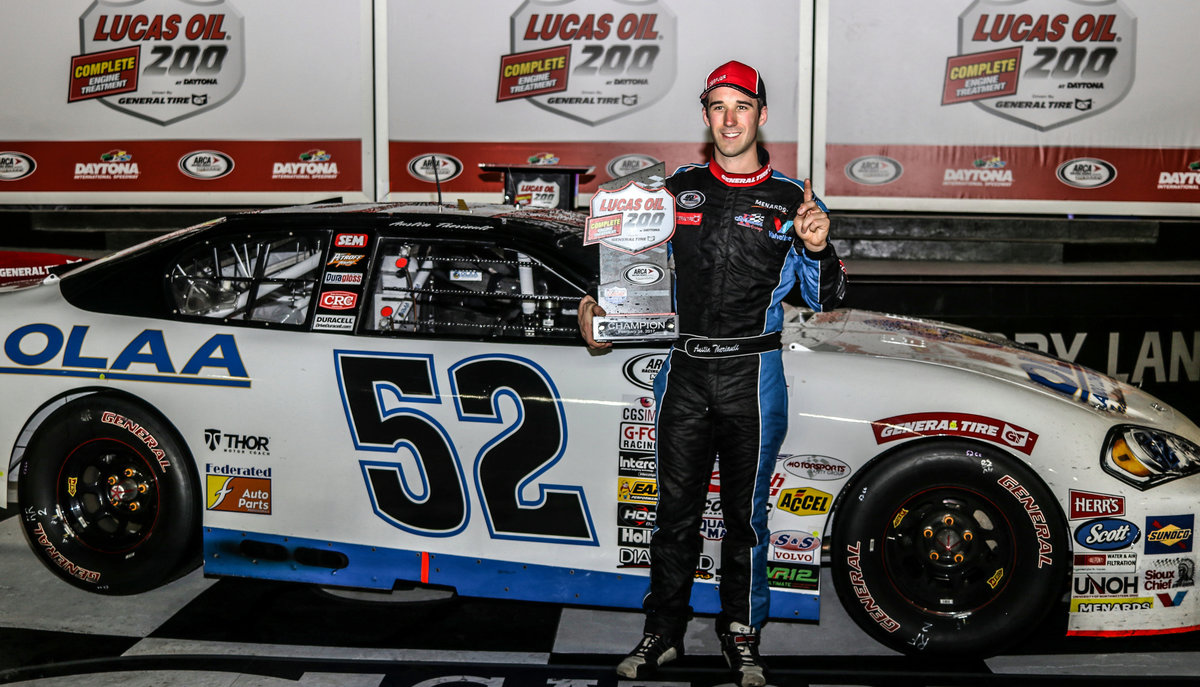 Austin Theriault’s pass for the lead on Terry Jones with eight laps to go proved to be the winning one.

Theriault got around the No. 30 Rette-Jones Racing Toyota in Saturday’s Lucas Oil Complete Engine Treatment 200 driven by General Tire in the ARCA Racing Series presented by Menards season opener.

Three laps later, Clint King made contact with Codie Rohrbaugh, triggering a four-car crash and sending Justin Fontaine for a wild ride along the front-stretch wall before coming to a stop upside down. The wreck caused damage to the SAFER barrier and time constraints, forcing ARCA officials to call the race and give the win to Theriault.

“We had too much time to sit around and I’d probably be crying right now if we would’ve gone back green,” Theriault said. “I know we would’ve had a good-enough car to take the checkered flag. We’re off to a good year. These guys are awesome, they’d do anything for us and that’s what’s going to make us successful this year. Orlando Longwood Auto Auction came on board last minute. They helped us get here so if it wasn’t for them we wouldn’t be here.”

Theriault’s drive to victory lane was marred by two big crashes on laps 49 and 75 bringing out two red-flags in the event.

The first wreck began when the No. 33 of Justin Fontaine gave ARCA veteran Mark Thompson a shot in the rear, sending the No. 66 Phoenix Air Toyota spinning in the infield grass and going back into the field, collecting a copious amount of cars. Last year’s Talladega winner Gus Dean saw his Daytona dreams go up in smoke being caught up in the multi-car wreck.

Pole-sitter Tom Hessert led the first 21 circuits until different pit sequences shuffled the New Jersey driver in-and-out of the top 10 before coming home in fifth spot. Hessert makes his next start at Talladega in May, driving a part-time schedule in the No. 25 Toyota. Teammate Leilani Munter’s chances of winning came crashing down in a lap 65 wreck, mounting heavy damage on her No. 15 Toyota while ending up finishing in 19th, one lap behind the leaders.

The scariest moment of the night involved Win-Tron Racing driver Justin Fontaine, who went for a wild ride along Daytona’s front-stretch catch-fence, a similar wreck to where Parker Kligerman damaged the SAFER Barrier in 2014 Daytona 500 practice. Fontaine’s car hugged the fence before coming to an upside-down stop. Medical staff got the No. 33 car back on all fours and extricated Fontaine from the car.

In a release from the team, it states the 19-year-old driver suffered a mild compression fracture in his back, damaging the L1 vertebrae and staying overnight in a local hospital. Track workers began repairing the SAFER Barrier before Saturday night’s Advance Auto Parts Clash for the Cup Series.

Rounding out the top-five were Shane Lee in third, followed by Cunningham Motorsports teammate Dalton Sargeant fourth with the veteran Tom Hessert in the fifth spot.

Alabama driver Bret Holmes was sixth with Ricky Sanders in the No. 69 Kimmel Racing Ford slotted in seventh. Mason Mitchell Motorsports records a eighth-place finish with Kyle Weatherman and a 10th with NASCAR Camping World Truck Series rookie Kaz Grala. The No. 58 Lira Motorsports car driven by Clint King split up the MMM duo in ninth.

The next time the ARCA Racing Series presented by Menards will be on Sat., April 8 at Nashville Fairgrounds Speedway for the Music City 200 presented by Jive.

First-Timers; Drivers Dazzling In Their Daytona Debut
In the Fast Lane with Julia Landauer