Beyond the Track: Andrew Combs 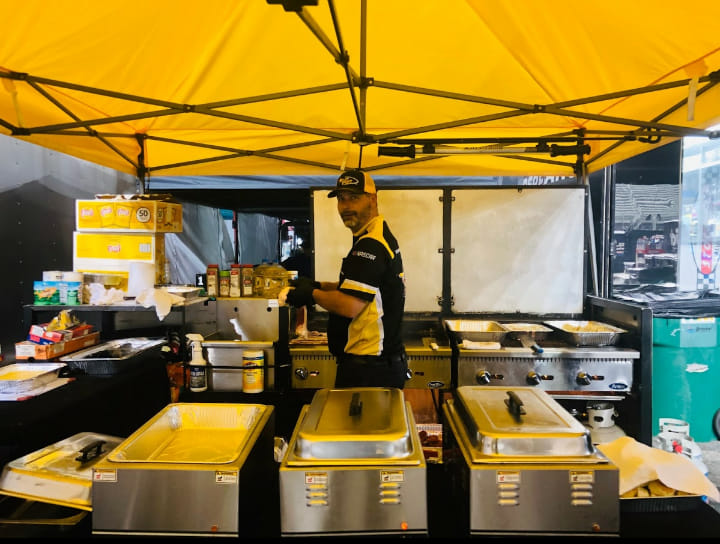 Drivers. Spotters. Crew chiefs. Pit Crew members. These are all jobs that come to mind when one speaks about NASCAR. Certainly, these folks are on the front lines. This Beyond the Track series will introduce you to a handful of the countless people that play a unique role in bringing NASCAR to the track and TV, week in and week out.

As a culinary school graduate with 30 years in the restaurant and food industry, Andrew Combs is on his second stint in NASCAR. He first ventured into NASCAR as a chef in 2001. After three years, he settled down, started a family, and stayed closer to home.

However, four years ago, he ventured back into NASCAR as a team chef for BK Racing. This ultimately led to his current position, working for Derrike and Elyshia Cope at StarCom Racing.

Combs shared, “The truck drivers used to cook, but teams started getting bigger and bigger, and they would bring in one person to specifically do that for them. I worked on the mechanic side until we were able to get the cooking department up and established. So now, I’m back on the road full-time as the Team Chef.”

In addition, Combs noted that he and his assistant, Will Byler, actually take care of numerous teams. On any given day at the track, they will feed between 150-400 people. This number includes all the team members as well as sponsors and team guests.

What a Weekend of Cooking for a NASCAR Team Looks Like

Prior to arriving at the track, Combs will submit an incredibly large grocery order through a major bulk food retailer. He and Byler aim to arrive at the track on Thursday. Once they land and secure their rental van, they set up their kitchen at the track and head out to pick up their food and supply order. After returning to the track, they start on any preparations and properly store food.

From there, they follow the NASCAR schedule, providing a full breakfast, lunch, and dinner throughout the weekend. For breakfast, they arrive two hours before the garage opens. Combs shared, “I do scrambled eggs, fresh bacon, sausage, fried eggs, and we do all that to order. While people are eating we’re refreshing the meal, and then we start getting lunch ready.”

After lunch, it is straight on to dinner prep. Each day includes a full salad bar, and not just lettuce and tomatoes, but upwards of 25 options to build a fresh salad. To top off each day is a “grab and go” dessert item as well. Countless options to make a fresh salad to please anyone that comes through his tent. (Image provided by Andrew Combs.)

As if this weren’t enough, Combs prides himself on doing everything possible to not repeat a main menu item throughout the entire season.

Hard Work Behind the Scenes

Combs is the mastermind behind the menu planning. Undoubtedly, this is an enormous feat. Not only does he try to take into consideration flavors local to the track location, but he also has to pay special attention to diets that vary throughout the teams for which he cooks.

Combs shared that the drivers and engineers typically eat the healthiest, and many are on Keto diets or gluten-free. Whereas the garage team members are more “hamburger and hot dog kind of guys” and, while they are picky, their diets aren’t as specialized.

With this in mind, he caters to those special diets but makes sure there is something for everyone. Because the StarCom team managers eat strictly beef products, Combs makes sure to have options for them, as well as those that are vegetarian. Definitely, this is a challenge. However, when he speaks about it, you can sense it is a challenge he enjoys.

A favorite meal he loves to provide is a taco bar. In addition to the regular fresh ground beef, chicken and fish options, Combs provides expands the menu to include beef barbacoa and pork carnitas. With these protein options, he includes also onions, tomatoes, fresh guacamole, and accompanies it with Spanish rice. With the nearly limitless options, no one leaves Combs tent hungry. (Image provided by Andrew Combs.)

All Hands on Deck

Combs is not only the Team Chef, but he also assists the pit crew in every race. After the final meal is served, he and Byler begin tearing down the kitchen and tents. Shortly after, he joins the No. 00 team with Quin Houff on pit road for pre-race ceremonies and then hits pit road.

There, Combs holds the sign so Houff can easily find his pit stall. Additionally, he is responsible for rolling a tire to the front tire carrier. In a previous season, he also ran fuel. When Byler is finished with the kitchen area, he runs tires for the No. 00 team. No doubt, these two stay busy all weekend long. When asked about the best part of his job, Combs said he loves the traveling and the interaction with everyone, from the drivers to the sponsors. He admitted he has “a relationship with the drivers that people would kill for.” He joked he is the “bartender of the track” and when folks come into his tent, their guards are down and they are just there to eat.

He shared that he has had drivers who had an altercation on track come to his tent for a meal later that day. Combs would crack a joke or make a comment, and after sharing a laugh, those two drivers would walk to the side and patch up their dispute.

Without sounding cliché, Combs confessed the hardest part of being involved with NASCAR is the time spent away from home. Not only the endless nights spent in a hotel, but missing out on sports that his children are involved with. He referenced what LeeAnn Egolf shared concerning how important the “road family” is.

He summed it up, saying, “It’s definitely a very tricky balance. It takes a special breed of crazy to do what we do.”

I asked Combs what the off-season looks like for him. And, as teams face an extended break due to COVID-19, he joked, “Well, we’re doing this now!” But in the true off-season, Combs first takes a month to spend with his family. After that, it is back to the StarCom Racing shop to repair the grill and repaint it.

In addition, Combs stated, “We brought in some sponsorship this year with Superior Essex, and they’re actually kinda sponsoring my kitchen so they gave me new tents and grill covers.” More of the off-season work includes trying to get ahead on menus. Combs admitted, “I just help where ever I can. I’m an idea guy.” For him, that means also assisting the Public Relations representative for StarCom Racing brainstorm potential sponsors.

Finally, Combs shared that during this unexpected break this season, he has had fun posting cooking videos in his Facebook group, “Cooking in the Fast Lane.” You can also find more pictures and information about Combs’ cooking and his track travels via his website.

I want to extend a huge thank you to Andrew Combs who took the time to chat with me and share many stories about his life as a Team Chef for StarCom Racing. I hope you enjoyed going behind-the-scenes with a Team Chef. Additionally, I hope you look forward to the next installment of Beyond The Track.