On the Gas & On the Brakes at IMS 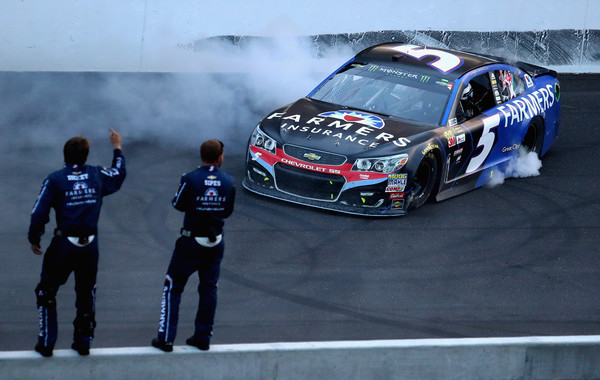 All things considered, this year’s Brickyard 400 at Indianapolis Motor Speedway (IMS) finished in 3 hours and 39 minutes. However, the 400 bore semblance to CBS’s hit reality show “Survivor.”

Be that as it may, for some, it was “The Amazing Race.” Just ask racer winner Kasey Kahne. On the other hand, some drivers wished they were on their brakes.

Ultimately, it’s about that time on The Podium Finish. Presently, with yours truly filling in for Stephen Conley, let’s look at those who were “On the Gas, On the Brakes at Indianapolis!” As a result of the carnage, Whitt and his 72 team parlayed strategy and smarts to a 12th at IMS. (Photo Credit: TriStar Motorsports’ Twitter)

5) Timmy Hill –  Of course, Sunday’s 400 at IMS was all about survival. Regardless, Hill and his 66 team can take heart in their terrific 14th place finish.

4) Cole Whitt – Each week on my Twitter, the TriStar Motorsports group is dubbed “the little team that could.” The No. 72 effort likely made their late team owner Mark Smith proud with a 12th at IMS.

3) AJ Allmendinger – For a team plagued by some bad luck in 2017, Allmendinger and his 47 team had to feel like winners with their top-10 result.

2) Matt DiBenedetto – NASCAR isn’t always about those big, conglomerate teams adorning those Fortune 500 companies. In fact, it’s about efforts like DiBenedetto and Go Fas Racing’s No. 32 team, where smart driving and strategy netted them with an excellent eighth at Indy.

1) Kasey Kahne – Arguably, it’s not been the best season for Kahne and his 5 team. Facing a somewhat uncertain future, a hard earned, exciting victory at IMS was truly special like “Special K.” No doubt, Earnhardt’s promising day ended during a jammed restart.

5) Jimmie Johnson – Of course, Johnson was not going to back off and go on the brakes going into turn 3 on lap 160. In this case, this was a driver who was hardly in hibernation mode despite having a playoff spot virtually secured, barring any strange setbacks.

4) Chase Elliott –  Consequently, it was a very short 400 for Elliott with an engine failure relegating the 24 team to a 39th place finish. One has to wonder when the bad breaks for this bunch will stop.

3) Dale Earnhardt Jr – Noticing a trend? Similarly, Earnhardt’s promising day at IMS was cut short on lap 77, crashing into the back of Trevor Bayne’s No. 6 ride, scoring a disappointing 36th.

2) Martin Truex Jr – Incidentally, the turn 1 crash on lap 112 shook up the complexion of the race. At the same time, it curtailed what looked like a potential winning day for Truex and company.

1) Kyle Busch – First and foremost, let’s acknowledge the fact that Busch had the strongest car in the field. In any event, the 2015 Cup champion was denied a chance at a three-peat in that game changing lap 112 accident.

With Indianapolis in the rear view mirror, drivers and teams look forward to the serene scenery of Pocono, PA. By and large, Pocono Raceway looks for 160 more reasons why it’s the “Tricky Triangle” this weekend!