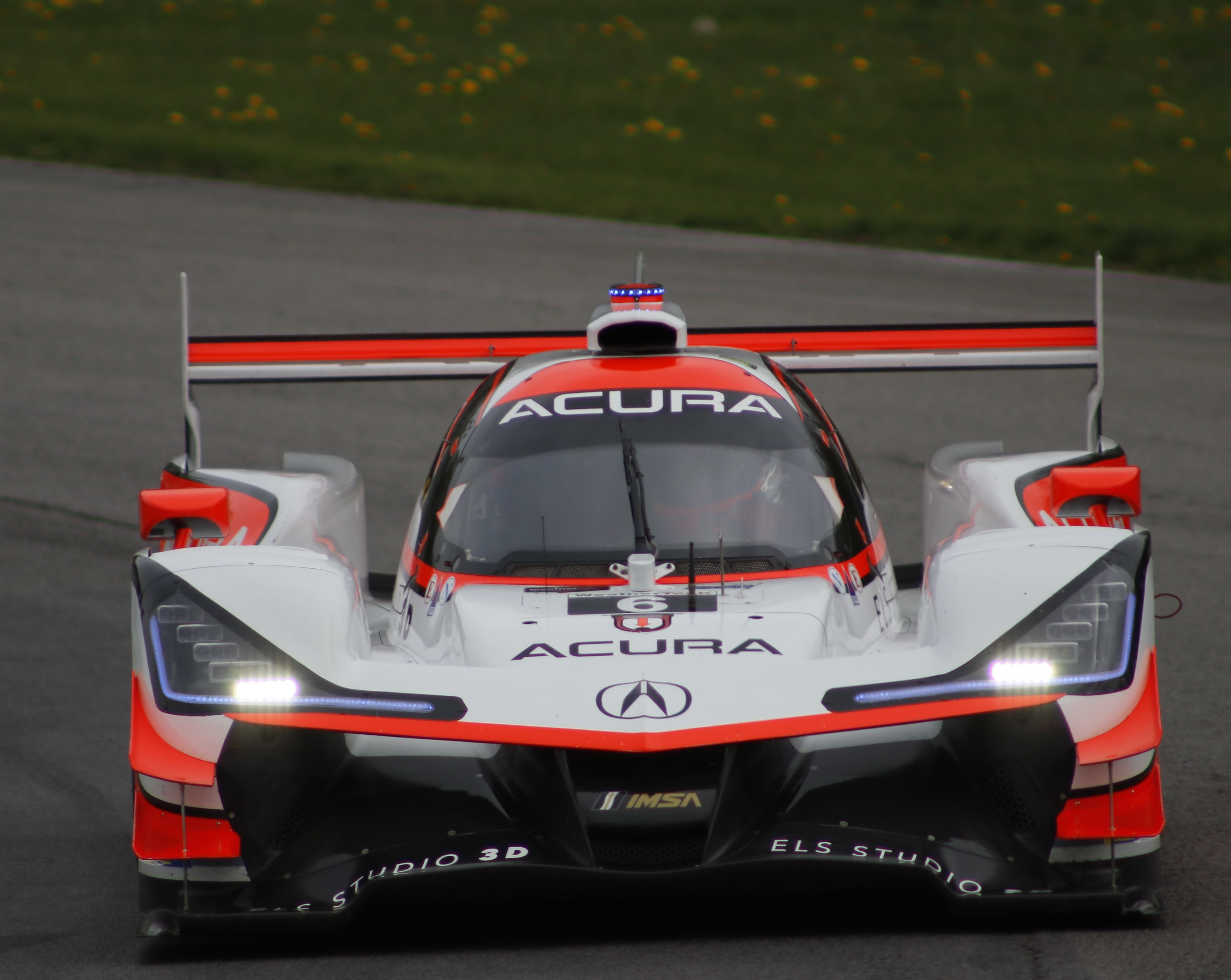 Sunday’s Acura Sports Car Challenge at Mid-Ohio was the first “standard-length”IMSA WeatherTech SportsCar Championship race of the season. Standard length is set at two hours and 40 minutes. The Acura Sports Car Challenge gave the fans fascinating competition throughout.
The season is well under way, and the competition for theBishop-France Trophy could go right down to the final minutes of October’s Petit Le Mans. Let’s take a closer look in our five takeaways from Mid-Ohio:

1: There are five different teams within eight points of the lead in the WeatherTech Championship Daytona Prototype international (DPi) point standings with next month’s Chevrolet Sports Car Classic in Detroit representing the end of the first half of the season. Those five are the leading No. 31 Whelen Cadillac at 120. The No. 7 Acura Team Penske team four points back at 116. Then comes the No. 10 Konica Minolta Cadillac seven points back at 113. And tied at 112 points are the  No. 6 Acura Team Penske and  the No. 5 Mustang Sampling Cadillac.
There are two more teams within 20 points of the lead as both the Nos. 55 and 77 Mazda DPi teams each have 100 points. That means there are seven – more than half of the full-time field – well within striking distance of taking the championship.
Don’t overlook the JDC-Miller Motorsports and CORE autosport teams either, because we’re coming up on some racetracks where both have been extremely strong in the past, especially last season.

No. 38 Performance Tech Motorsports teammates Cameron Cassels and Kyle Masson are clinging to a four-point lead over No. 52 driver Matt McMurry with PR1 Mathiasen Motorsports.
In GT Le Mans, there’s a nine-point gap, 126-117, between the leading No. 912 Porsche GT Team duo of Earl Bamber and Laurens Vanthoor and their No. 911 Porsche teammates Nick Tandy and Patrick Pilet. Two-time and defending champions Antonio Garcia and Jan Magnussen in the No. 3 Corvette sit between them with 119 points.
And in GT Daytona (GTD), eight points are separating the top five teams. Leading the way is the No. 86 Meyer Shank Racing Acura squad with 84 points, followed by the No. 12 AIM Vasser Sullivan Lexus with 80, the No. 14 AIM Vasser Sullivan and No. 73 Park Place Porsche are tied with 77 and the No. 44 Magnus Racing Lamborghini has 76.
Buckle up, because this is shaping up to be fun.

Repetition is The Name of the Game

2: Sunday’s race featured “repeat” winners of sorts in the DPi, GTLM and GTD classes, with the LMP2 making its first appearance as a standalone class this past weekend. DPi winners Juan Pablo Montoya and Dane Cameron made it two in a row at Mid-Ohio for Acura Team Penske in the No. 6 ARX-05 machine, the year after Helio Castroneves and Ricky Taylor delivered the program’s first win at the same racetrack. Bamber and Vanthoor repeated their GTLM class victory from a year ago, and also picked up their second straight GTLM class win after taking last month’s BUBBA burger Sports Car Grand Prix at Long Beach.
In the GTD class, it was the second Mid-Ohio win in a row for the Lexus RC F GT3. Last year, Dominik Baumann and Kyle Marcelli scored the marque’s first GTD win for 3GT Racing. This year, it was Jack Hawksworth and Richard Heistand delivering the goods for AIM Vasser Sullivan.

3: After Cadillac DPis won each of the first three races of the 2019 WeatherTech Championship season last weekend at Mid-Ohio was all about Acura Team Penske and Mazda Team Joest.
The two teams battled it out Saturday in qualifying, which saw Oliver Jarvis take the pole position in the No. 77 Mazda DPi ahead of Cameron in the No. 6 Acura and Helio Castroneves in the No. 7 for Acura Team Penske. The battle resumed Sunday when both the No. 77 Mazda and the No. 6 Acura took turns at the head of the field and were joined by the No. 55 Mazda DPi shared by Jonathan Bomarito and a guest-starring Hunter-Reay. Ultimately, the war was won by Cameron and Montoya in the Acura, with Jarvis and Tristan Nunez coming second in the No. 77 followed by the No. 55 Mazda.
The Mazda Team Joest and Acura Team Penske DPi programs in the WeatherTech Championship were announced within a month of each other back in the summer of 2017. Much was said and written before both teams’ respective debuts in the 2018 Rolex 24 At Daytona about the strength of both organizations, and last weekend could foreshadow a clash of sports car racing titans ahead.

How Many Podiums is that for the No. 3 Corvette Team?

4: From the start of the 2017 WeatherTech Championship season through Sunday’s Acura Sports Car Challenge at Mid-Ohio, there have been 26 GTLM races. The No. 3 Corvette C7.R squad of Magnussen and Garcia have been on the podium in 16 of them. Sunday’s runner-up result marked the team’s third consecutive top-three result this season. Last year, they podiumed eight times in 11 races. In 2017, they had five podiums, including their most recent win at VIRginia International Raceway.
Magnussen, Garcia and the Corvette Racing team drew up the blueprint on how to win GTLM championships in 2017 and 2018 – which they did each time. It appears they’re following it again in 2019.

5: Sunday’s race marked the debut of the seven-race WeatherTech Sprint Cup competition for the GTD class. The “championship within the championship” encapsulates seven sprint races of two hours, 40 minutes in length or shorter.
The introduction of Sprint Cup also ushered in the debut of the new McLaren 720S GT3, bringing the British supercar marque into the top level of IMSA competition for the first time. Paul Holton and Matt Plumb shared the No. 76 Compass Racing McLaren.  Plumb qualified eighth on the GTD grid ahead of two manufacturers in the class that now has nine different brands competing. Unfortunately for McLaren the car retired before the checkered flag in Sunday’s race with a mechanical issue.