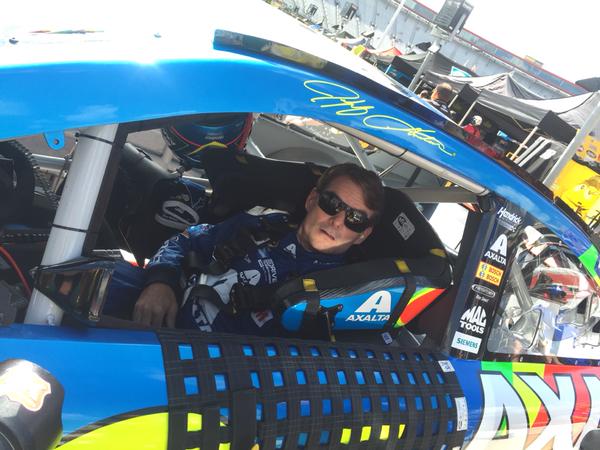 Alright, so Jeff Gordon isn’t the young gun racer back in 1995 who was in the midst of winning his first NASCAR Sprint Cup Series championship as a 24-year-old aggressive, cunning, raw talented third-year racer.  In fact, he’s compiled 83 additional wins, three Cup titles, and oh yea, he doesn’t need to win – he wants to win.

While Gordon is nearing the end of his spectacular NASCAR racing career, the competitive fire to win races and battle for the ultimate and fifth series banner is absolutely still there.  Heading into tonight’s Irwin Tools Night Race at Bristol Motor Speedway in 15th place, 55 points in the good with the Chase Grid, Gordon, who starts 24th in the No. 24 Axalta #Rainbow24 Chevrolet SS, isn’t standing idle with his performance thus far heading into Race No. 24 of this season. Jeff Gordon realizes that there’s still work to do if they’re going for the title.

Does that put us in the championship contender mode? I don’t know — we’ve got a lot of work to do to do that. We are missing some speed and we are working hard to try to find it. It’s very competitive out there. Some other organizations have gotten ahead of us. You don’t just find that overnight.” Gordon and his No. 24 team, led by crew chief Alan Gustafson, have battled hard each race weekend to be more than a contender for strong finishes but for wins.  Earlier in the year, Gordon scored poles at Daytona and Talladega, showcasing his penchant for dropping the hammer when it comes to qualifying.  He’s enjoyed the great moments with fans, his family, and with this peers on the track.  During races, there’s still ground to make up on the competition.

Clearly, the 44-year-old Vallejo, CA native realizes that they’ve got work to do if they’re going to contend against the likes of the Joe Gibbs Racing quartet of Denny Hamlin, Kyle Busch, Carl Edwards, and Matt Kenseth, Team Penske’s Brad Keselowski and Joey Logano, the Stewart-Haas duo of Kevin Harvick and Kurt Busch, and his Hendrick stablemates in Jimmie Johnson and Dale Earnhardt Jr.  In recent weeks, scoring top-10’s have been moral victories but that isn’t the style of racing that Gordon and his No. 24 team are satisfied with by all means.

That said, Gordon is not resting on laurels, track records, or even the fact that he’s racing a very popular and sentimental paint scheme at Bristol Motor Speedway.  Instead, it’s about wanting a win, not needing it or be given the victory after hours of racing. Jeff Gordon sporting the “modern” look of the Axalta firesuit.

“I want to win, there’s no doubt about it,” Gordon said.  “I always want to win. When you drive for Hendrick Motorsports every season, there’s always pressure to win because you know that you’re with one of the best organizations. And I feel like we’ve had a few opportunities that have slipped away from us, like Martinsville. But, we’ve got another Martinsville coming up, which I’m excited about. We’ve got Bristol. This is a track where we ran very well earlier in the year. So, there are some tracks that we could win at if you look at the stats and you look at our performance.

But, I’m not going to let that ruin this year for me, or add any more pressure than there already is. We’re doing everything that we possibly can to be the best we can be; to communicate and work together and come out of this thing knowing that we gave it everything that we’ve got. And so, we don’t need a win. A win would be nice. And a win would certainly make things a little easier over these next couple of weeks, but when you say ‘need’ a win, I’ve won 92 times. I don’t need a win. I want to win. That’s all.”

Earlier in the year at Bristol, Gordon overcame a loose wheel that put him two laps behind the race leader, driving his way to a third-place result, his first top-five of what’s been a somewhat middling final full-time NASCAR season. Competitively, when throwing out the aero component and allow the driver to be a huge part of the equation on race day, this is where the No. 24 team shines in 2015.

Reflecting on the #Rainbow24 paint scheme, Gordon praised Sam Bass, the famed motorsports artist behind the design of the original No. 24 Hendrick Motorsports Chevy as well as the fans and his longtime sponsor Axalta Racing. “I’m so proud of Sam (Bass, artist) for creating that paint scheme to begin with all the way back to DuPont and now Axalta,” Gordon said. “I give them a tremendous amount of credit for bringing this back and the fans. The fans have spoken. I thought driving the rainbow paint scheme was in my rearview mirror, but the fans overwhelmingly fought for it and wanted to see it one more time. Thanks to Axalta for making that happen.

What I love is if you get close up to it, it shows some of their modern technology and coatings. It’s a little fancier than it used to be. It’s very cool. I was very proud this morning to not only see all the cool gear from what all the fans were sporting out there, but to hop in that car. You forget how this car made an impact back in the day. As I got in the car I don’t get to see it on the track, I’m driving it. You can’t miss this car on the track. It just stands out.

Luckily when we ran this car in the early to mid-90s, it stood out. It turned a lot of people into fans that are still life-long fans. Those people are the ones that are so grateful to have this car back on the track, but I am too. I was really proud to get behind the wheel.” Iconic racers are often associated by their legendary rides like Richard Petty with his famed Petty blue and STP red No. 43 machine and Dale Earnhardt with the intimidating black, white, and silver No. 3 GM Goodwrench Service Chevy.  Perhaps Gordon’s signature ride long after his career is over will be that famed, unmistakable No. 24 rainbow colored Chevy that stood out above the rest during NASCAR’s rise to popularity in the 1990s. It was during this time when then crew chief Ray Evernham was like stock car’s version of Pat Riley, Bill Walsh, or Scott Bowman, as he tapped into his inspirational leadership skills to push his team and his driver to be their very best, even when it seemed like they climbed the summit of the mountaintop.

Although this famed paint scheme will likely have fans reminiscing of Gordon’s dominance at virtually every track of the circuit, it’s equally synonymous with the diligent team that worked alongside him, including Evernham, a great catalyst with the No. 24 team.

As retro is embraced by today’s youth and those who reflect on yesteryear, it is easy to see why the race fans adore and love when drivers and teams sport the colors of the past.  NASCAR was becoming widely accepted in regions that likely missed out on the days of Petty, Darrell Walltrip, and the Allison clan dominating the stock car circuit. Legends crossing: Dale Earnhardt Sr. and Jeff Gordon looking over the No. 24 car.

Maybe a racer like Mark Martin or Dale Jarrett appealed to that young race fan who wanted to find a racing hero that could duke it out with Earnhardt, Rusty Wallace, and Terry Labonte.  If someone wanted to go bold and brave with choosing a racer to follow in the 1990s, Jeff Gordon was likely the posterboy of that revolution in NASCAR racing.

Sure, Gordon wasn’t a Southerner.  Originally, he sported a mullet and mustache before going with a modern look. Yes, he was a young racer who drove a distinct racecar, but with a great team and organization, he was able to hold his own and then some against the very best of the sport.

Ultimately, the sight of this colorful car could make even a longtime follower or fan feel like they’re back in their childhood or at least feeling like it’s back to the 1990s like Scottish indie rock group Travis once sang.  Unlike those “good ole days” for Gordon, the boo birds have changed their tune with him. Jeff Gordon looks to drive this machine into Victory Lane tonight at Bristol.

Nowadays, the fans who once jeered Gordon are now cheering for him when he walks the stage and waves to the crowd during driver’s introduction.  During his more recent victories, he’s celebrated those special occasions with the fans and his crew like that of Martinsville two years ago or those four triumphs last season at Kansas, Indy, Michigan, and Dover. Tonight, while Gordon is closing out his sensational career and ponders about a possible final run at the Cup, he’s at least going back to the past and driving the #Rainbow24 Chevy stock car that last raced a points event on Monday, November 20, 2000 at Atlanta Motor Speedway.  The rainbow may be returning but it would be quite the sight of Jeff Gordon jumped from the roof of his No. 24 Chevy like he did after winning his second title.

Like Gordon, this paint scheme is embraced and has taken on a modern approach with a goal that’s been a part of this future NASCAR Hall of Famer’s approach for the rest of this season: to win.

Author’s Notes :  It’s a very special day today in the Tiongson household.  I’d like to dedicate this article to my awesome older sister Marie-Terese aka Tessie as she celebrates her birthday today!  One of my best friends and inspirations with writing, it’s a small present but I am always thankful for my wonderful family and my rad sister!