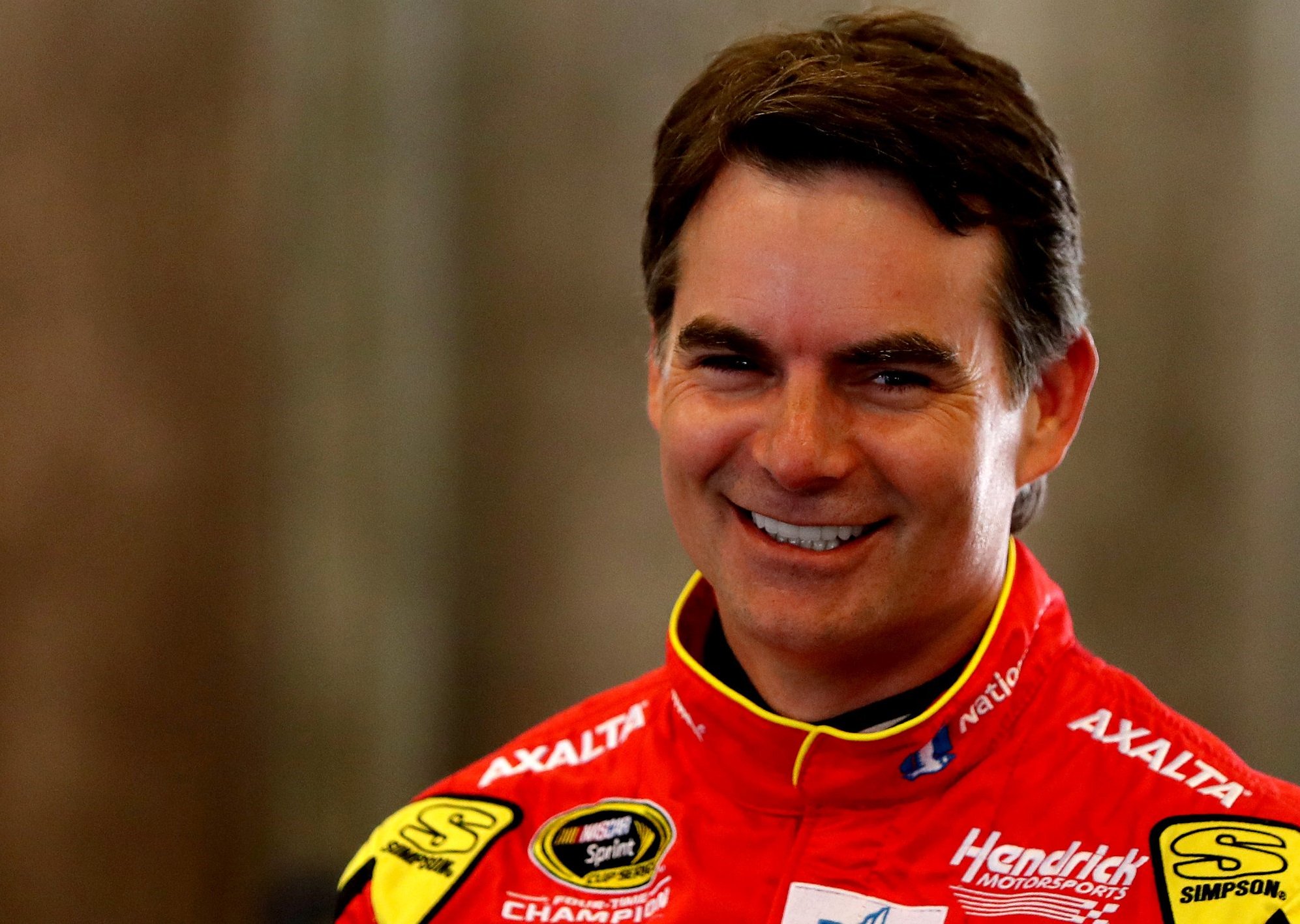 While he returns to his familiar NASCAR racing home and with one of the top efforts in the Cup garage, it comes with the progressive news story of Dale Earnhardt Jr’s decision to recoup from concussion-like symptoms.

To say the least, it’s a situation in which Gordon realizes the magnitude of the situation while doing what he can for his teammate’s No. 88 Axalta Racing crew.

Gordon clambers into the No. 88 ride ready to help out teammate Dale Earnhardt Jr.

“We just want him to be there when he is ready and when the doctors say he is ready,” Gordon said.  “I will do whatever I need to do.”

For the time being, Gordon is tasked with racing Earnhardt’s No. 88 Chevy at Indianapolis and Pocono, two tracks in which the future NASCAR Hall of Fame driver has a combined 11 Cup victories.

While Gordon has not raced in the first 19 events of the season, he has been keeping tabs of the changes to the cars, the aero packages, and today, his competitors as he worked in the booth for FOX NASCAR’s coverage earlier in the year.

“When you get to drive a race car like this, it certainly just helps you focus on what you need to do out there,” Gordon observed.  “Being out of the car that long and not really having a lot of experience with this package it was a tall task, I will be honest.

It was one of the most challenging days I’ve had in a race car to try to get comfortable, be consistent, have the speed and give good feedback.”

So far, Gordon has shown remarkable poise in perhaps the most unique challenge he’s faced as a driver.  Although Gordon starts 21st, he expressed confidence with the car and with the No. 88 team with crew chief Greg Ives at the helm.

Gordon and crew chief Greg Ives will give it all they’ve got in these next two races.

“I’m having fun working with Greg and all the guys on this No. 88 team,” Gordon said.  “I feel really good about the things that we learned yesterday at the end of practice (on Friday).  I would have liked to have been starting further forward, but you know we have some work to do. I look forward to the challenge tomorrow.”

It goes without saying how Gordon’s track record at Indianapolis is simply sensational in a stock car.  With five wins at this venue (1994, ’98, ’01, ’04, and ’14), he certainly brings a lot of valuable input and experience to the table.  He understands his role and also what it means to help out the team that’s been his NASCAR Cup home since late 1992.

Perhaps to clarify the situation for racing fans, Gordon assured the masses that this is not going to wind up being a Brett Favre or Mark Martin situation.

“No, this is not a Mark Martin moment,” Gordon stated.  “It’s not like, ‘Okay, I think I’m going to come back full-time and run a whole season.’  That is not happening, not happening at all.”

Ultimately, Gordon isn’t totally intent on making these next two weekends about himself or padding to his legendary career.  Rest assured, he’s aware of the situation and his strong shot at scoring his sixth win at his adopted home track.

Considering that he’s racing against the car which he raced throughout his Cup career and fills in for a friend, like many in the sport and the Hendrick organization, Gordon has his focus on the bigger pictures. Gordon understands the magnitude of his fill-in role with the No. 88 team.

“Well, first off, there are so many strange scenarios that play out in this situation,” Gordon said.  “I mean, I’m going to be racing against the No. 24 car out there. I mean, none of us anticipated this happening. You can’t plan. You don’t know how you are going to react to it.

To me, once I get behind the wheel and I’m inside the car I don’t know what is on the outside of that car. It’s a race car and I’m going to be focused on driving, not focused on anything else. But, when I’m standing outside of it and I’m looking at the No. 88 car and Dale Earnhardt, Jr.’s name over the door… it is certainly a unique situation that I don’t know how that is going to impact me.

Mostly, I’m just thinking about Dale, Jr. and what he is going through and how tough this has been on him and this team to have driver’s getting in and out of the car.  They want him back and we want him back. I’m just going to be focused on doing my job the best I can and hopefully walk away with this experience with them in a good place and where I can hold my head up high about the job that I did.”

After logging solid laps in the two rounds of practice on Friday and getting back to the swing of things with Saturday’s qualifying sessions, race day has arrived and the competitor is ready to go at it for at least one more race at Indianapolis.

Regardless of his finishing position, Gordon’s relief effort speaks volumes about his loyalty to Hendrick Motorsports, his willingness to help out those who catalyzed his stock car career, and most of all, assuring his teammate’s crew that all will be fine in these challenging times. While Gordon races the No. 88, they’ve not forgotten about the man who’ll return in time to his ride.

“If I may just add that to me, when Hendrick Motorsports is dominating this series, that highly motivates your competition; and they go to work,” Gordon said.  “And sometimes you get torn down while you’re getting your butt kicked. But, you start to find a way to get yourself better than you were before and hopefully get yourself in position.

The resources and the type of people that Hendrick Motorsports has is sort of what’s happening to us right now. We’re being highly motivated by other organizations and teams that are out there and are getting great results. But, we’re too good of an organization not to find a way to only make ourselves better and stronger and our cars faster to get back to that place.”