Full-field qualifying results with the three-driver lineups listed can be found here.

A 1:46.874-minute lap around the 3.74-mile Sebring International Raceway was enough for Ricky Taylor and the Acura Team Penske No. 7 squad to celebrate a pole award during the final race weekend of the 2020 season.

Taylor’s lap was 0.251-seconds quicker than the time his father’s Cadillac, driven by Renger van der Zande, was able to lay down during the fifteen-minute Prototype session. Taylor and his full-season co-driver Helio Castroneves lead the championship standings in the Daytona Prototype International (DPi) class by just two points over the No. 10 Cadillac owned by Wayne Taylor, driven by van der Zande and Ryan Briscoe throughout the entire season.

The PR1 Mathiasen Motorsports No. 52 has now won every single LMP2 pole award during the 2020 IMSA WeatherTech SportsCar Championship with Kelly behind the wheel, excluding the Rolex 24 Hours of Daytona, which doesn’t hand out championship points in the LMP2 class.

Kelly, who already has claimed the 2020 LMP2 championship, set a 1:51.373-minute lap during the session, an entire 1.774-seconds ahead of their closest competitor.

Antonio Garcia nabbed the GT Le Mans (GTLM) pole award during the Friday qualifying session. The No. 3 Chevy Corvette turned a 1:55.456-minute lap with Garcia behind the wheel, 0.66-seconds ahead of Connor De Phillippi in the factory BMW.

Garcia’s lap narrowly nipped the GTLM track record set by his co-driver Jordan Taylor, which was 1:55.634. Taylor’s original lap was just set in July. The two who have already clinched the GTLM championship and will share the Corvette with Nicky Catsburg on Saturday. 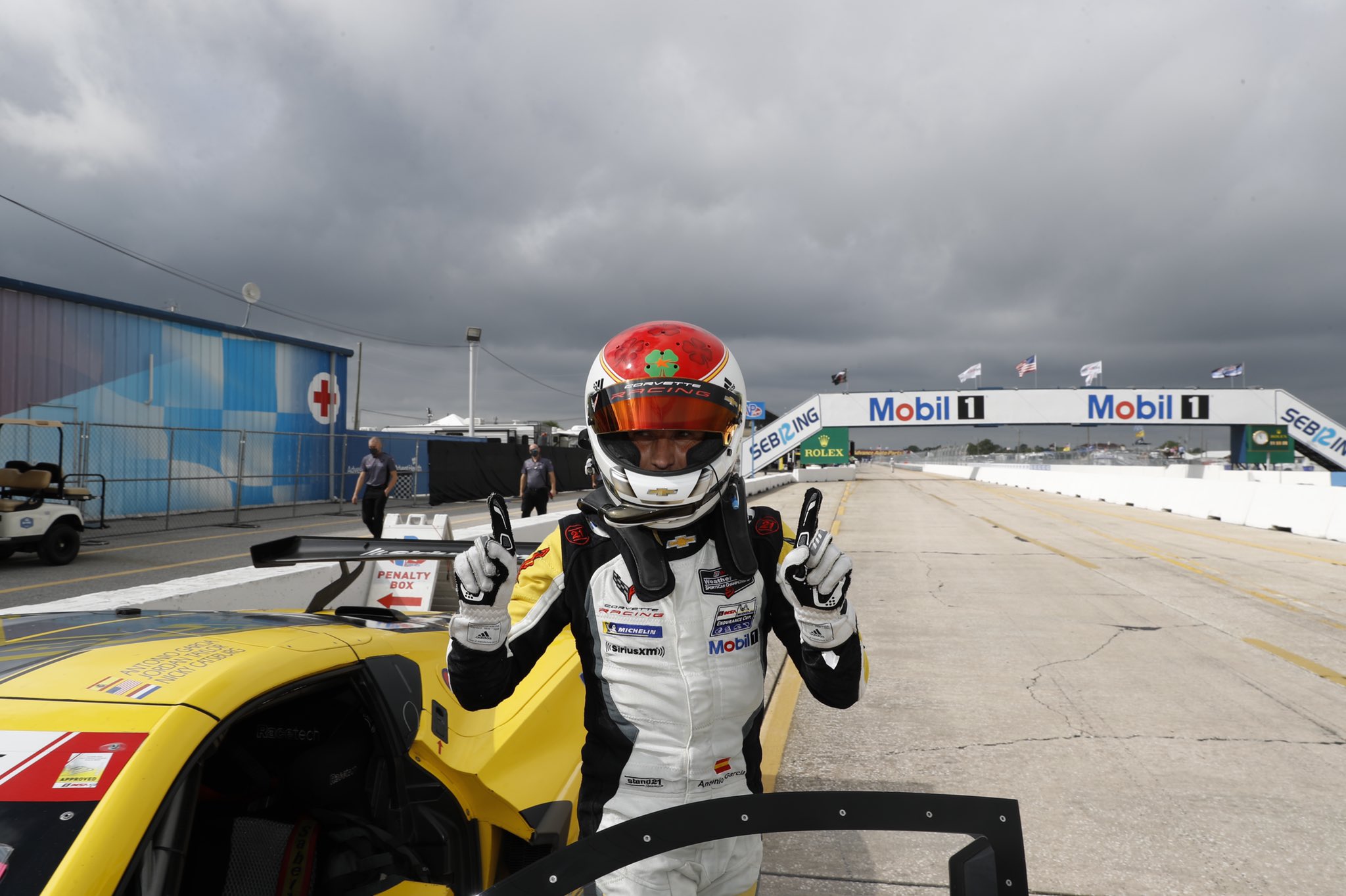 De Phillippi and the No. 25 BMW Team RLL M8 GTE qualified on the front row with Garica. Row two consists of another BMW and Corvette, with Jesse Krohn qualifying the No. 24 BMW to a third-place run and Tommy Milner ending the session fourth in the No. 4 Corvette.

Both factory Porsche 911 RSR 19’s failed to qualify in the opening two rows, slotting in fifth and sixth during Friday’s qualifying session. Nick Tandy qualified the No. 911 while Neel Jani drove the No. 912. Team Hardpoint and the No. 30 Audi R8 LMS GT3 bounced to second in the final results with just a handful of minutes remaining. The lap posted by Andrew Davis was just 0.05-seconds quicker than the lap Aaron Telitz was able to muster in his AIM Vasser Sullivan Lexus RC F.

Telitz and Jack Hawksworth won the 2-hour, 40-minute sprint race held in July, which, due to the COVID-19 pandemic, was held at Sebring. With points in GTD only being handed out towards the Sprint Cup championship and not the overall season-long title, Meyer Shank’s duo of Farnbacher and McMurry didn’t compete.

Meyer Shank Racing’s duo of Mario Farnbacher and Matt McMurry lead the GTD standings by just 10 points over Telitz. The team’s endurance driver, Shinya Michimi, qualified the No. 86 Acura NSX GT3 Evo in the eighth-position on the GTD grid.

Cooper MacNeil spun the Scuderia Corsa Ferrari during the session, however, was able to rebound for a fifth-place on the time sheets. The Ferrari 488 GT3 barely backed into a tire barrier, but continued on with minimal damage.

Misha Goikhberg spun the Heinricher Racing with Meyer Shank No. 57 Acura on his installation lap. He qualified the NSX in 12th-place.