Harry Tincknell took the checkered flag first in Saturday’s Mobil 1 Twelve Hours of Sebring, the 68th edition of the event. The No. 55 Mazda DPi was able to take advantage of several others’ misfortunes throughout the all-day affair in Sebring, Florida.

Saturday’s 12-hour got underway at roughly 10:10am local. When the checkered flag flew, Mazda and Porsche were victors in the DPi and GT classes, respectively.

The race was the 11th of the 2020 WeatherTech SportsCar Championship, closing out the IMSA season.

The pole-sitting Acura Team Penske No. 7 finished last in-class on Saturday, however, celebrated a championship.

The chaotic race ended with the Mazda Motorsports No. 55 of Tincknell, Jonathan Bomarito and Ryan Hunter-Reay taking the checkered flag ahead of Acura Team Penske’s No. 6. 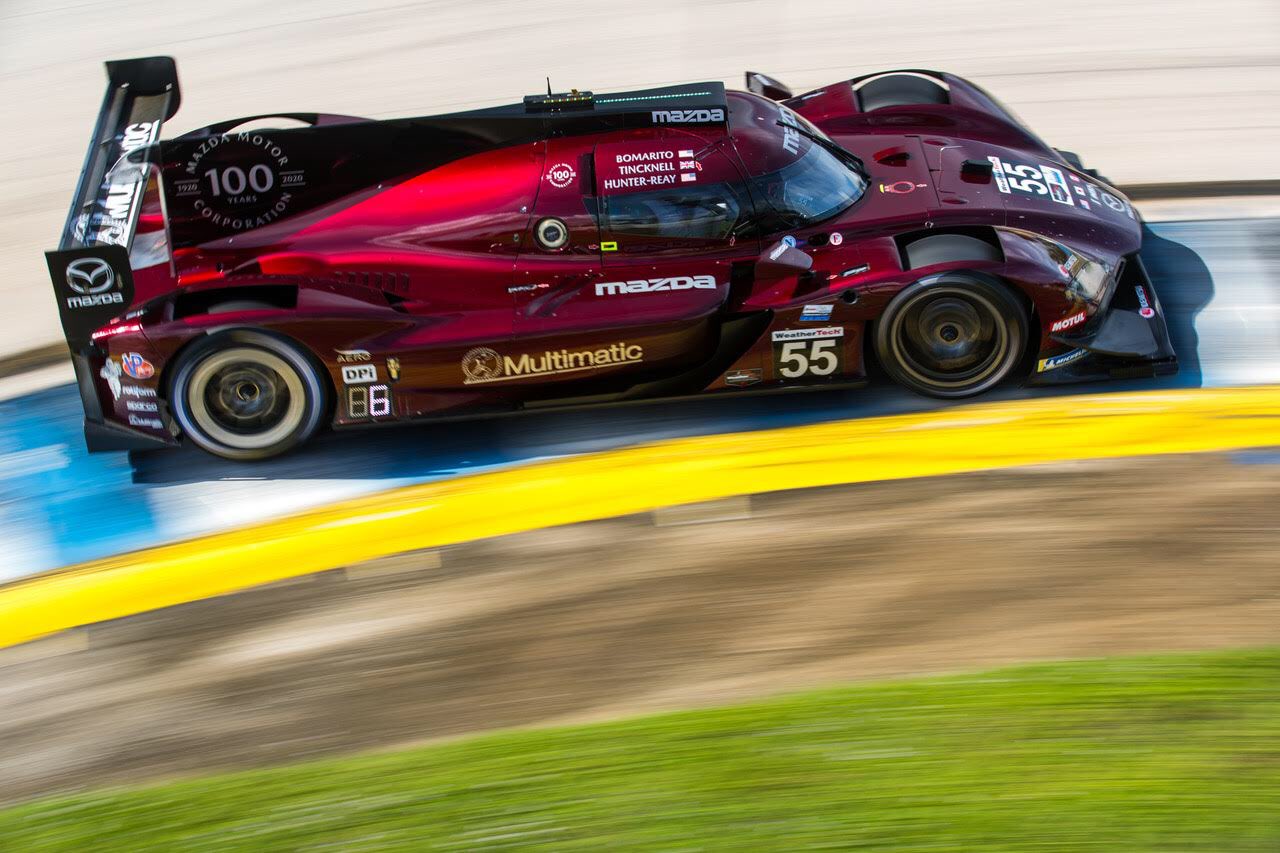 Oliver Jarvis had been leading with 30 minutes remaining, until a tire went flat on the No. 77 Mazda Daytona Prototype International (DPi). Debris from the tire caused a full-course caution and allowed his Mazda teammate to take the overall lead.

Despite the flat tire, the No. 77 was still able to finish in third-position, securing two Mazdas on the podium. However, the third-place finish for Jarvis, Tristan Nunez and Olivier Pla was shortly behind the No. 6 Acura.

The win is the first endurance victory (outside of Watkins Glen 2019) for the factory Mazda DPi team. Bomarito and Tincknell celebrated a win at Daytona in the 2-hour, 40-minute July trip while the sister No. 77 failed to win this season.

With the win, and the misfortune of others, the No. 55 of Bomarito and Tincknell were able to propel themselves into third in the final standings.

Juan Pablo Montoya took the Acura Team Penske No. 6 to a second-place finish in the final race for the Penske’s Acura program. Montoya held off Jarvis in the closing minutes on a restart to secure the second-position.

Montoya, paired with Dane Cameron and Simon Pagenaud, lead a decent portion of the way on Saturday. Penske’s No. 6 led 86 of the 348 laps during the race, the most overall.

The sister car faught intercooling issues within the ARX-05 during the opening hour. The No. 7, driven by Helio Castroneves and Ricky Taylor with Alexander Rossi, was in the midst of the championship fight, leading by only two points over Wayne Taylor Racing’s two-driver duo.

The No. 7 fought all day, but due to the misfortune of others, capitalized and won the DPi championship despite a last-place finish in-class.

The Whelen Engineering Action Express Racing No. 31 Cadillac fought throughout the entire race, knowing their only shot at the title was with a win. With Pipo Derani behind the wheel, the Cadillac was able to capitalize on the opportunity, until getting into Juan Pablo Montoya late.

The run-in with Montoya finally boiled over after three-straight races that Derani had been run into by an Acura. Derani’s contact with Montoya broke the steering of the Cadillac and was penalized for accident responsibility, eliminating him from a shot at the win.

A run-in halfway through the race with the No. 77 Mazda essentially took out the WTR team of Ryan Briscoe and Renger van der Zande from championship contention and the race. Endurance driver, Scott Dixon, was run into by Olly Jarvis in the No. 77 Mazda, cutting down the tire of the Cadillac.

Dixon nearly limped around the entire 3.74-mile course on a flat tire, damaging the WTR DPi all the way around the course.

Both JDC-Miller MotorSports machines led during the 12-hour. The Mustang Sampling Racing No. 5 of Sebastien Bourdais, Tristan Vautier and Loic Duval led throughout the race on-merit, and looked like a strong contender for the overall win.

JDC’s No. 5 struggled at the end of the race as darkness fell, leading a total of 59 laps.

The No. 85 Cadillac of Matheus Leist, Stephen Simpson and Scott Andrews led based on pit strategy, but led 12 laps.

Once again, the No. 52 PR1 Mathiasen Motorsports ORECA dominated the race, leading 324 of the 340 laps in-class. 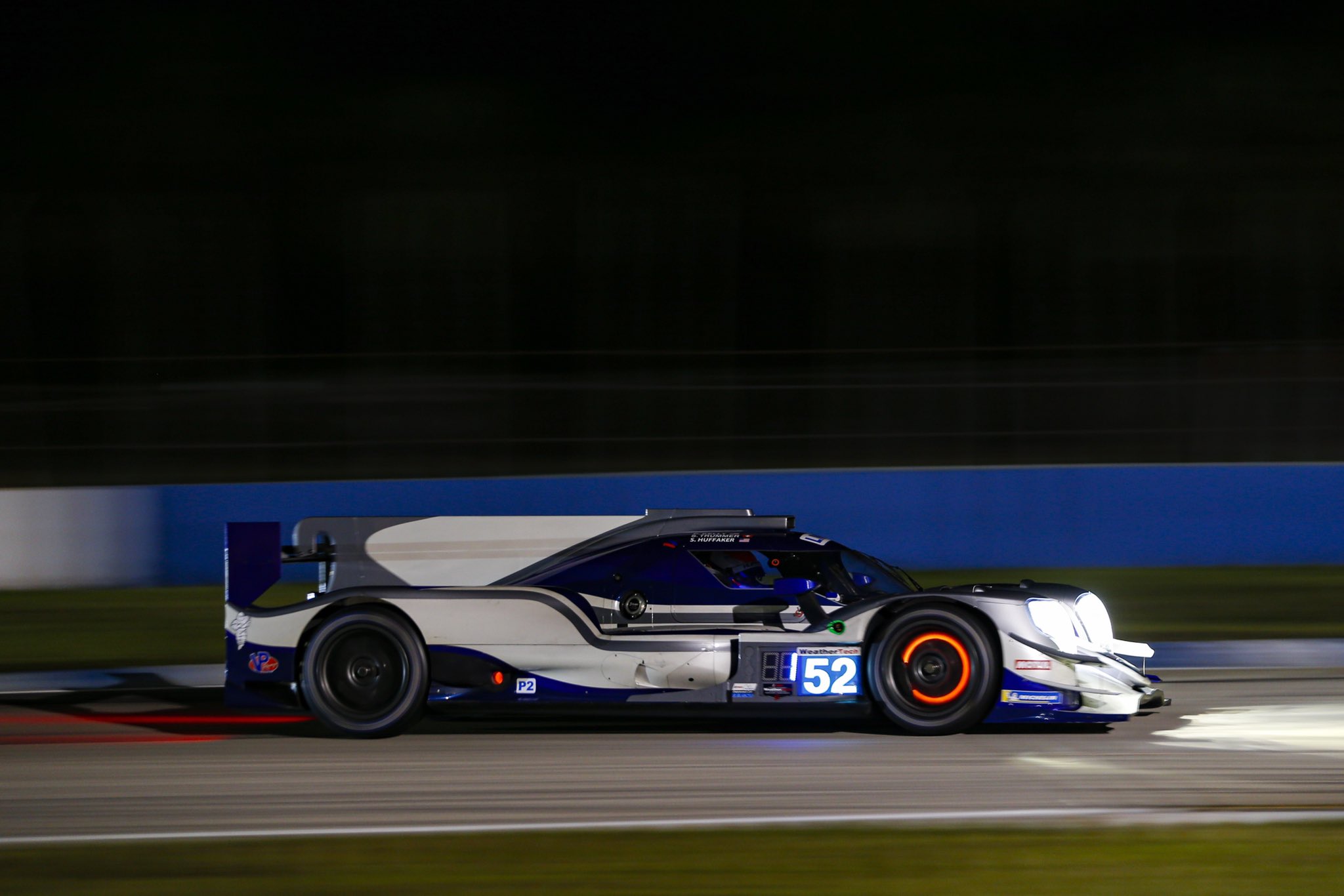 The race didn’t go without drama for the race-winning car. The No. 52 had a run-in with the No. 3 Corvette GTLM throughout the race when Nicky Catsburg cut across the bumper of the ORECA.

The No. 51 Inter Europol Competition LMP2 was the only other car to lead in-class, however, while leading, Jakub Śmiechowski wrecked in turn 17, handing off the lead back to PR1.

As a result, the No. 51 finished in fourth-place, 20 laps down. The final step of the podium went to the No. 38 Performance Tech trio, 8 laps down, and the No. 8 Tower Motorsports team rallied back to a runner-up finish.

The No. 8 Starworks-prepared Tower Motorsport trio managed a second-place position despite multiple spins and run-ins with the wall on Saturday. They finished two laps down.

In the final race for the factory Porsche GTE program, the team finished 1-2 with Earl Bamber sharing seat time in both cars.

A drama-filled race for the Corvette duo allowed the Porsche team to capitalize. The No. 4 fought engine issues and eventually crashed, forcing the car back to the paddock.

The BMW Team RLL organization failed to finish on the lead lap, posting third and fourth place finishes after getting taken out by the Riley Motorsports AMG on a late race restart.

Nick Tandy, Frank Makowiecki and Bamber scored the win in the No. 911 Porsche 911 RSR – 19 while the No. 912 of Bamber, Laurens Vanthoor and Neel Jani finished second. 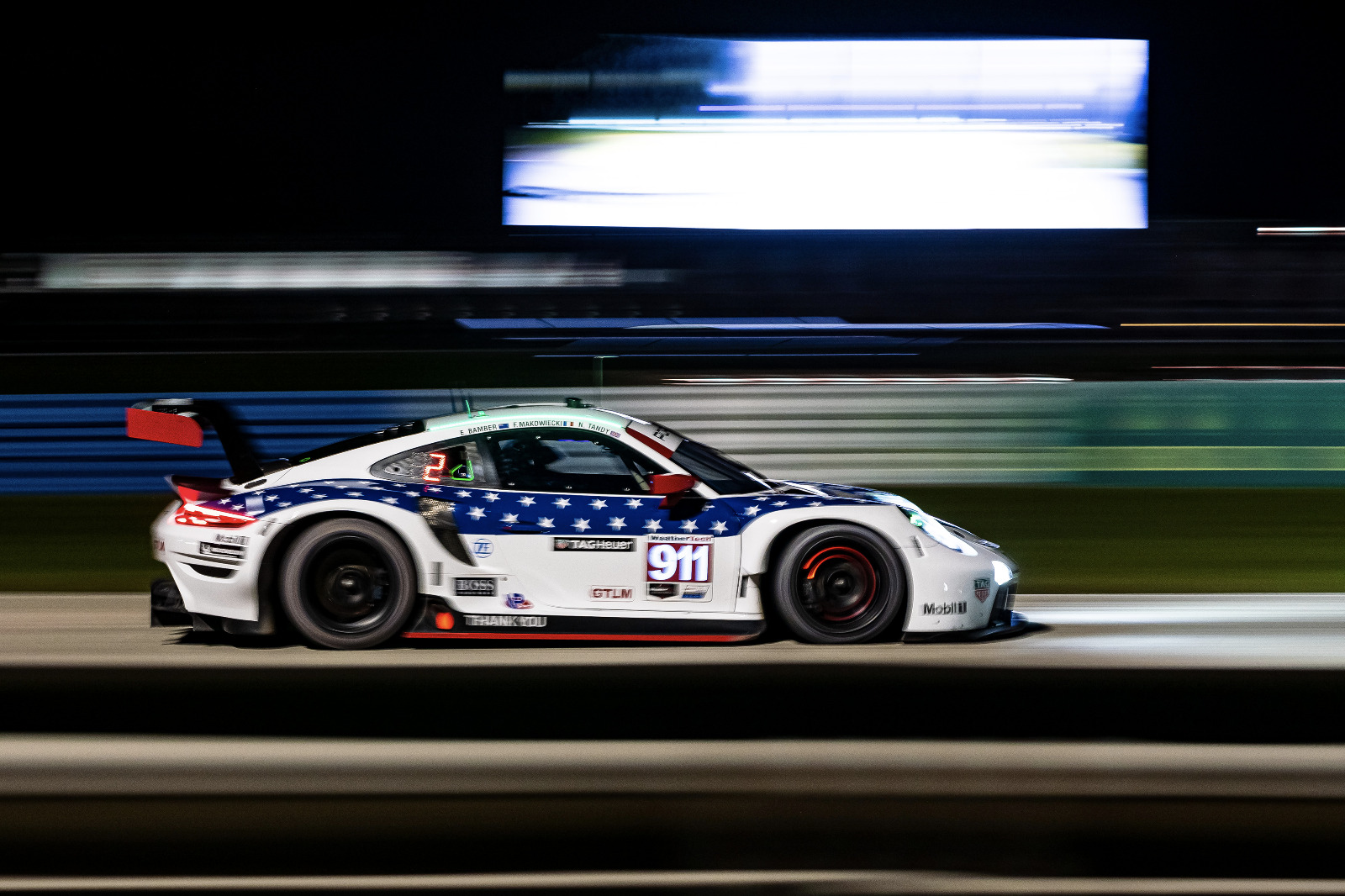 The factory Porsche No. 911 RSR 19 flies through the darkness during the Mobil 1 Twelve Hours of Sebring. (Picture Credit: Porsche Motorsport)

While leading, Townsend Bell and Kyle Kirkwood both crashed their AIM Vasser Sullivan (AVS) Lexus RC F’s into the seventeenth turn. Both GT Daytona (GTD) machines lost control in the turn after the No. 4 Corvette GTLM suffered an engine issue.

The No. 14 Lexus was un-repairable and the No. 12 only suffered minor damage. Because of this, the No. 14 crew assisted the No. 12’s repairs, allowing Bell to return to the race.

While at first, it seemed like oil was laying on-track, RACER Magazine’s Marshall Pruett suspected that water had been laying on the course from the No. 4. The Hardpoint Audi and Wright Motorsports Porsche also spun.

The No. 74 Riley Motorsports AMG ran into both GTLM and GTD leaders on the final restart, eliminating the No. 63 Scuderia Corsa from contention late from Sebring.

The Grasser Racing No. 11 had been leading when an axel problem eliminated the Lamborghini from the race. The team repaired the Huracan GT3 after an extended trip to the paddock, but still retired from the race within the final two hours.

Wright Motorsports Porsche recovered and scored the class win, beating the Heart of Racing Aston Martin. However, they came up just short for the GTD championship with the Meyer Shank Racing (MSR) Acura finishing on the podium. 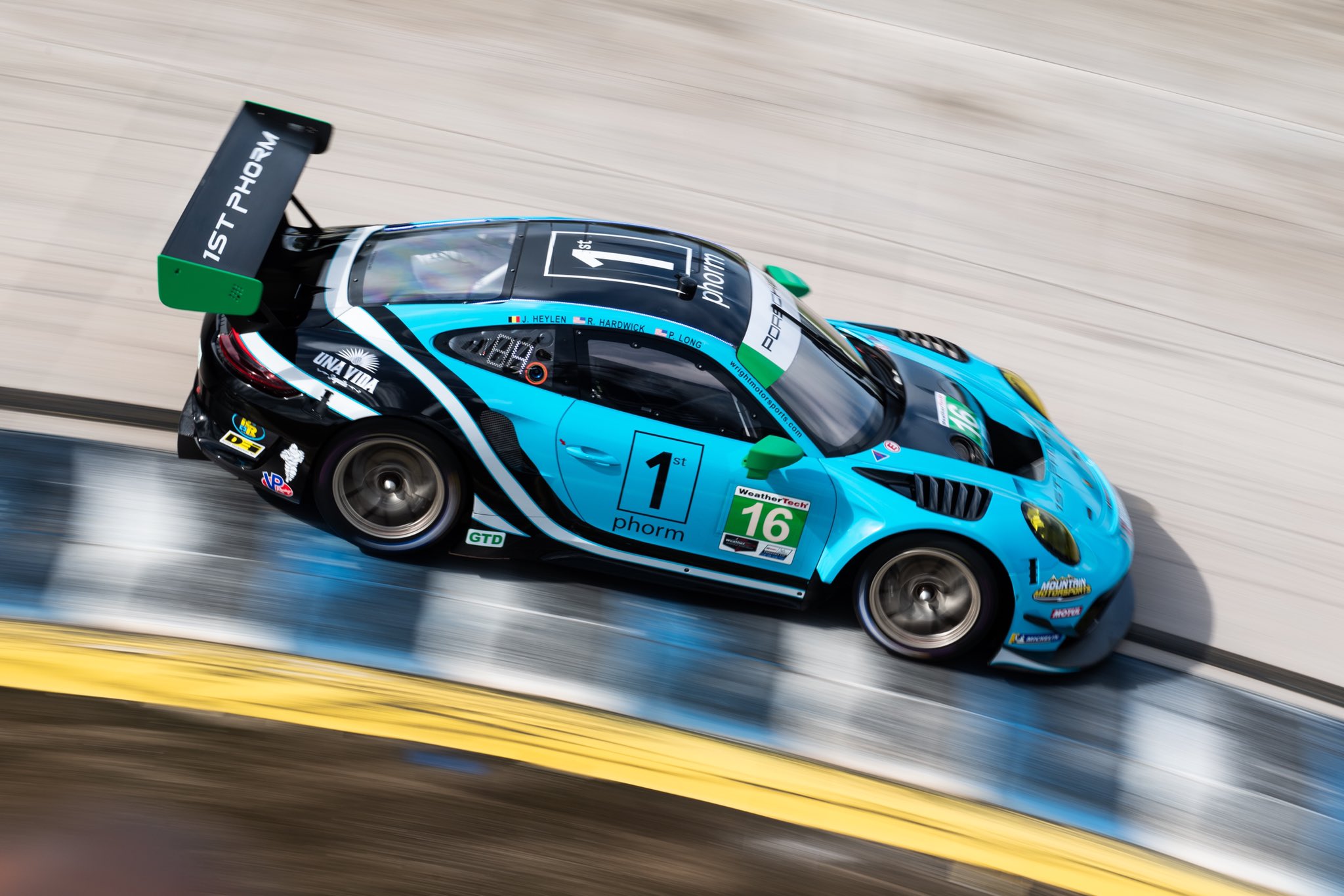 Saturday’s race was stressful for MSR co-owner Mike Shank, who became very upset with competing cars running into his No. 86 Acura NSX. Shank accused race control and several teams for their actions during Saturday’s race in multiple NBC Sports interviews.

Ryan Hardwick, Patrick Long and Jan Heylen captured their first victory as a team at Wright on Saturday in the No. 16 Porsche 911 GT3R. Full-field results provided by IMSA can be found here (PDF).