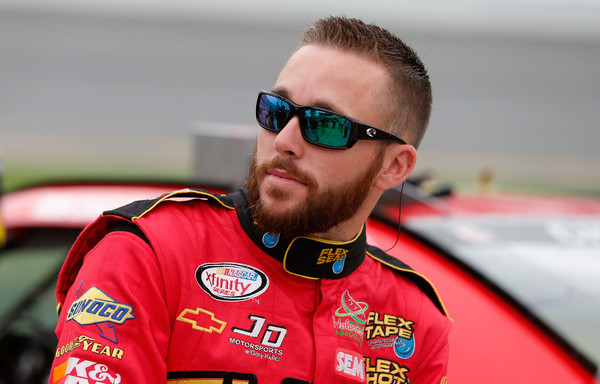 Imagine being in Ross Chastain’s shoes as he prepared for NASCAR Camping World Truck Series qualifying at Charlotte Motor Speedway.  Naturally, his mindset was on getting the best lap for the No. 66 Bolen Motorsports Chevrolet entry when good news came from a phone call.

“On Friday of the Truck race weekend at Charlotte, I got the call before qualifying,” Chastain recalled.  “I was actually out on pit road when Tony, our VIP of marketing at JD Motorsports, called me.  He’s like, “Man, are you ready for the good news?”  I was so focused on Truck qualifying and I said, “Yea, Tony’s, what’s going on?”  It was kind of loud.  He said, “We’re going Cup racing with you!”

It took a second.  There’s some pictures I saw online with me on the phone, so that’s pretty cool.  I didn’t tell anyone at the time.  It’s cool that it came all through.”

Life can move pretty quickly for the 24-year-old from Alva, FL.  Chastain’s primary efforts have been with JD Motorsports in the NASCAR Xfinity Series as the driver of the No. 4 Chevrolet Camaro.

Ultimately, it’s the call that every driver awaits for and relishes when the opportunities arises.  The question was not so much if it would happen, but when it would take place.

“I got the first call about it less than two weeks ago,” Chastain said.  “I don’t know what day it was.  We kind of talked through it and Johnny Davis at JD Motorsports sat down with Premium Motorsports and explained everything and all the sides beyond the racing on track and how it looked like for us as a whole.  We wanted to do it but we didn’t know if it was going to happen.”

Prior to the upcoming NASCAR race weekend at Dover International Speedway, Chastain has raced in his normal ride with JD Motorsports and the Bolen Motorsports’ No. 66 truck entry.  The Floridian will attempt a tripleheader of racing action at “The Monster Mile,” preparing for his debut in the Monster Energy NASCAR Cup Series with the No. 15 Premium Motorsports team.

Each of Chastain’s entries will carry a familiar message that race fans have been accustomed to during the June race weekend at Dover and in his NASCAR career. Chastain looks to promote the Delaware Office of Highway Safety’s message in the No. 15 Cup entry.

“All three vehicles will look identical,” Chastain explained.  “The Delaware Office of Highway Safety does a big push and have sponsored racecars for years.  We took their program and customized it for us in that we can offer marketing and branding for their logo and their message for seatbelt awareness in the spring and driving sober in the fall.  That kind of aligns with the two races.  It aligns with the summertime with the watermelon theme.

They don’t have any NFL or MLB teams.  Racing is their big sports push every year.  They were doing that and we customized it with the watermelon theme.  We took it to a million and a half and they wanted to do it more and we’ve got two million watermelon stickers in the state.  They started with the “Protect Your Melon” buckle up message and in the fall, it’ll be the “Use Your Melon” drive sober message.

We try to do more than put decals on the racecars.  So many people do that but we wanted to do more to give value to the people that are paying for us to go race.  Thinking outside the box and doing that, we’ve had this idea for half a dozen years but it didn’t come to fruition until I came to JD Motorsports and all the pieces of the puzzle worked out with actual sponsors on the racecar.”

While the message with the Delaware Office of Highway Safety may seem like second nature to most motorists, there is the sobering reminder for motorists who may not abide by a simple law.

“It’s crazy with the stats of people not wearing their seatbelts,” Chastain observed.  “Unfortunately, they’re getting in crashes and getting ejected from their cars.  We just hope that wearing a safety belt can save a life.  I’m an eternal optimist with everything but the facts point to people wearing their seatbelts.  Just put them on.  Besides the fact that they’ll ticket you, even if you’re sitting in the backseat, it can endanger those in the front seat.  People in the NASCAR world and those shopping in the grocery store will hear about it.”

Suffice to say, Chastain makes it a point to harness himself in his safety belt and gear at all times when he’s on the road and at the track.

In terms of his upcoming Cup debut this Sunday at Dover, Chastain is a realist who wants to capitalize on the opportunity at hand with Premium Motorsports. Chastain looks to carry his experiences in Xfinity and Truck competition to his Cup debut at Dover. (Photo Credit: Jeremy Thompson)

“Fans like drivers that go fast,” Chastain said.  “One day, I hope to get to a place where I can go fast in a Cup car.  I want to be able to work on everything else that goes along with that.  There’s more to all this than going fast.

My first goal in racing is, when I get to the racetrack, to figure out how I can go as fast as I can in the racecar that I have with the people I work with.  I want to get everything I can out of the car if I’m giving it all I’ve got.  To be honest, I feel I’m not there in the XFINITY car.  I don’t want to fool myself in thinking that I’ve got it all figured out.

For example, in opening practice at Charlotte, I picked up on something in the XFINITY car that I hadn’t in years past.  I want to get as many laps as I can and try to get to the point where I’m getting out as much out of the car as I can.

I don’t feel anybody’s ever ran the perfect lap in anything.  There’s always something you could’ve done differently. It may have been an inch on the track, left to right, or on the gas or brakes.  I’m just trying to do everything I can to make myself the best racecar driver I can be on the racetrack.  In my mind, that’s making laps on the racetracks.

I’m ready to figure it out and get to Dover in the Truck first on Thursday.  On Friday, I’ll practice both cars and qualify and race the Trucks.  On Saturday, I’ll practice the Cup car more.  I won’t know until I get out there and drive out in the corner.  Hopefully I won’t do anything stupid cause that track is tough!”

For this Floridian, it may not be like watermelon farming.  Then again, racing at Dover is not an ordinary, run of the mill track, for any driver to make their debut.  Ultimately, he accepts the challenge and the unique characteristics that comes with this one-mile concrete beast. Chastain takes the time to work with his team to be as competitive as possible. (Photo Credit: Jeremy Thompson)

“It’s crazy,” Chastain described.  “Down the fronstretch and going into one, I try to position left to right if there’s a car right in front of me.  I like the inside line entering the corner low and getting near the apron early.  If there’s a car in front of me, I try to turn before they do to put some air in my nose to keep it turning.  In the center, I’ll let it come up and off the bottom a few feet.

I try to get to the apron on exit and do a double apex.  Basically, I try to drag the left side of my splitter on entry and exit.  Same thing on turns three and four, although it doesn’t work as well.  You should be as low as you can on in four because there’s bumps in turn three that’s not there in turn one.  My biggest sensation of speed is going in turn one.  Coming off turn two, you get a bunch of wheel load.

Until then, Chastain is prepared for the week of his tripleheader NASCAR duties.  With his family and friends traveling with him to Dover, DE, the young racer will immerse himself with the cause working alongside his racing efforts.

“I’ve got a bunch of events with the Delaware Office of Highway Safety leading up to the races,” Chastain said.  “You do a lot more than put a decal on the racecar.  On Tuesday until we get on track, I’ll be busy with some cool stuff.  Check out our social media stuff as we’ll give you a chance to follow along with what we’re doing about our campaigns.”

Track Talk: Coca-Cola 600 at Charlotte Motor Speedway
On The Gas, On The Brakes At Charlotte