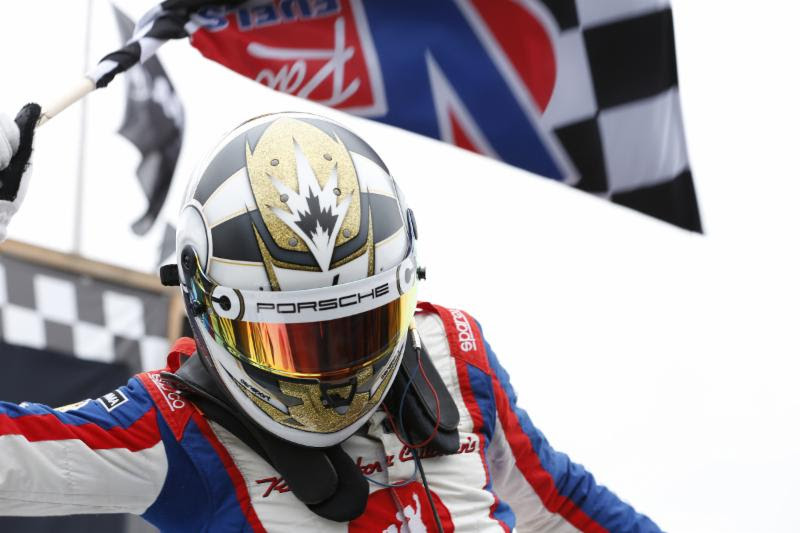 18-year-old Canadian Roman De Angelis had back to back wins entering Mid-Ohio. Both of those races, De Angelis went wire-to-wire. In the second-half of the Porsche GT3 Cup Challenge USA by Yokohama Doubleheader, De Angelis had to work for this one. Parker Thompson started from the pole and looked to be the next driver to lead start to finish.

De Angelis put the pressure on Thompson throughout the first 20 minutes of the race, but Thompson held firm. It wasn’t until 25 minutes left in the race that De Angelis was able to put a move on Thompson and grab the lead, he then showed his speed. De Angelis would pull away for a 5.052 second victory over Thompson.

“We pushed really, really hard,” De Angelis said. “It was really difficult because we started third. I had to get by a few cars.” De Angelis said that he had a tough time getting a run on the Thompson. Parker didn’t make it really easy for me. We were driving pretty aggressive, so I had to push to get by him.

De Angelis said The No. 79 Racing for Children’s/Medical Properties Trust Kelly-Moss car was on rails. I’d like to be four-for-four right now, but it is what it is, and I can’t thank them enough. We’re just going to keep gathering these points and pull out as big of a lead as we can and hopefully take the championship at the end. That’s what we’re here for.”
The win allowed De Angelis to extend his lead in the Platinum Cup championship standings.
Related TopicsfrontheaderheadlineIMSAMid-Ohio Sports Car CoursePorsche GT3 Cup Series