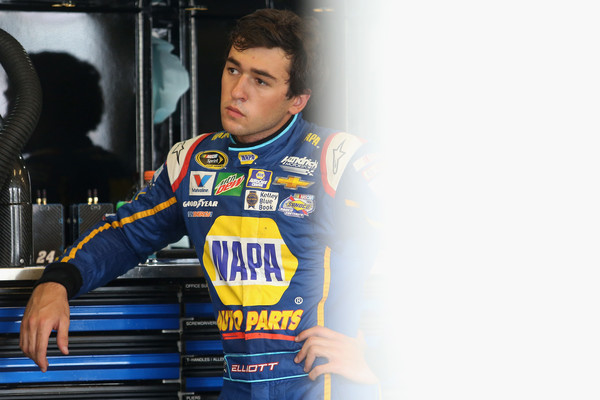 It would be understandable to a lot of racing fans if 20-year-old Chase Elliott felt the pressure of taking over the reins of the No. 24 Chevrolet entry from Jeff Gordon this year.  Given that Elliott comes from a successful racing family, races with the juggernaut Hendrick Motorsports entry, and carries on a famed ride that was part of NASCAR’s popularity bloom in the past two decades, it’s a lot of expectations to live up to.

However, Elliott has that Dawsonville, GA coolness much like his father Bill in that the pressure does not get to him. If anything, he channels his confidence and poise as a racer on the track, an approach which has clearly paid off for this Sunoco Rookie of the Year candidate. Chase Elliott has been focused on consistency and scoring wins in his rookie campaign. (Photo by Daniel Shirey/NASCAR via Getty Images)

“When I get inside the car, I can’t see the outside of the car,” Elliott said. “You know, it’s an honor to have the opportunity to drive the 24. Everyone has been very supportive. I’m very appreciative. But once you get in, you can’t see what number is on the outside. You’re just trying to go as fast as you can.”

Consistency has been a staple for Elliott this season with six top-fives, 11 top-10’s and two pole positions in his freshman Cup effort.  To say the least, it’s been a year with solid performances at tracks like Pocono, Michigan, Dover, Talladega, and Bristol with top-five efforts.

That said, Elliott isn’t set on just being satisfied with top-five or top-10 finishes.  The 2014 XFINITY Series champion is intent on capitalizing each weekend with fast racecars and delivering for the hardy No. 24 NAPA Racing/SunEnergy 1 Chevrolet team led by crew chief Alan Gustafson.

“This season has had its ups and downs when you go back and look at the different weeks of the year so far,” Elliott reflected.  “There have been moments where I think we’ve had a lot of things to be proud of.  We’ve had some super-fast cars since day one and that’s hard to do.

I couldn’t really ask for anything more there from the No. 24 guys.  I’m just trying to improve on my end and make sure I’m giving my guys the job that they deserve and hopefully we can try to compete with those guys this week. There’s still a lot of room for improvement and we’re not satisfied with where we are.”

Heading into Saturday night’s Cup race at Kentucky Speedway, Elliott sits eighth in the points standings or 12th in the Chase Grid outlook.  Throughout this season, he has established himself not only as a contender for race wins but as a factor for this year’s championship battle.

Clearly, Elliott not only has confidence with his abilities behind the wheel but with his No. 24 team and it all starts with the man atop that pit box during each Cup race weekend.

“Alan Gustafson has been great and that entire group of guys is so good and they’re established and have been around,” Elliott said. “They’re a winning group. I truly believe that they’re a group that can win and if I can do my part for them, I believe that we can go for some good finishes and hopefully for some wins.”

Quick to adapt to the various changes from what was prevalent in the XFINITY and Truck divisions, Elliott has been one tough customer as the year has progressed.  Aside from last Saturday’s race at Daytona in which a lap 90 crash derailed this Peach State native to a 32nd place result that was not of this effort’s doing, it’s been an impressive run of races since the spring race at Phoenix.

Focused on going after that first Cup win and essentially a ticket into the Chase field, Elliott’s steely focus is solely on the track and he doesn’t have a favorite in mind on the Cup circuit.  Ultimately, the no man is an island approach is one that’s catalyzed some of the best racers in this sport.  Elliott has turned to his Hendrick teammates throughout the season, which in turn, has likely accelerated the learning curve when looking for fresh perspective.

“Honestly, they’ve all been really really good,” Elliott said.  “I can’t name one of them that hasn’t lent a helping hand or just been all in as far as any questions I might have had. I try to be all ears with all advice. I’ve had a lot of opportunities to talk with all of them. They all kind of offer different perspectives and different views and they are all where they are for a reason. So they are definitely good at what they do and I think anything they say is worth listening to.”

As one of the rising stars of the NASCAR Sprint Cup Series, Elliott has truly knocked on the door as a contender on race day.  It is no longer a question of this young racer scoring his first Cup win but rather, when it will happen.

Today’s NASCAR is far different from the times when the likes of Bill Elliott and Dale Earnhardt Sr battled on the track.  Winning is more than just a momentous occasion for driver and crew as it is essentially a ticket to make a stock car version of the playoffs.

Cool, confident, and undaunted by the high stakes and obstacles prevalent in this style of NASCAR racing, Elliott’s objective each week is about winning to maintain that strong, consistent presence as a front runner in the Cup ranks. The potential to score a victory is there but Elliott’s evaluation of the big picture is sound and more of a veteran’s perspective than that of a fresh eyed rookie racer. Elliott isn’t going to settle as merely a rookie learning the NASCAR Sprint Cup style but rather, as a legitimate force on the circuit. (Photo by Zach Darrow, TPF/Prime 39)

“A race win each week is always the goal, that would be fantastic and would take care of the rest,” Elliott said. “For us, we show up at the race track each week with the mindset that we’re there to win, we’re there to try to do our job and we don’t show up worried about anything else. We’re just trying to get to victory lane.

The way I see it is yes, you can ‘points’ your way in, but to have a shot you’ve got to be a consistent contender to win races. And I think we have a little bit of work to do to be among those consistent contenders that have the ability each week and those are the guys you’re going to have to beat when it comes this fall.”

For now, this month’s races at Kentucky, Loudon, Indianapolis, and Pocono are in the horizon and those are four solid chances towards scoring that first win and securing a Chase Grid seed.  Based on how quickly this young racer has picked up on the nuances of the premier level of NASCAR, it wouldn’t be a surprise to see the unmistakable No. 24 team continue their tradition of excellence while establishing a new legacy in the making with Chase Elliott.