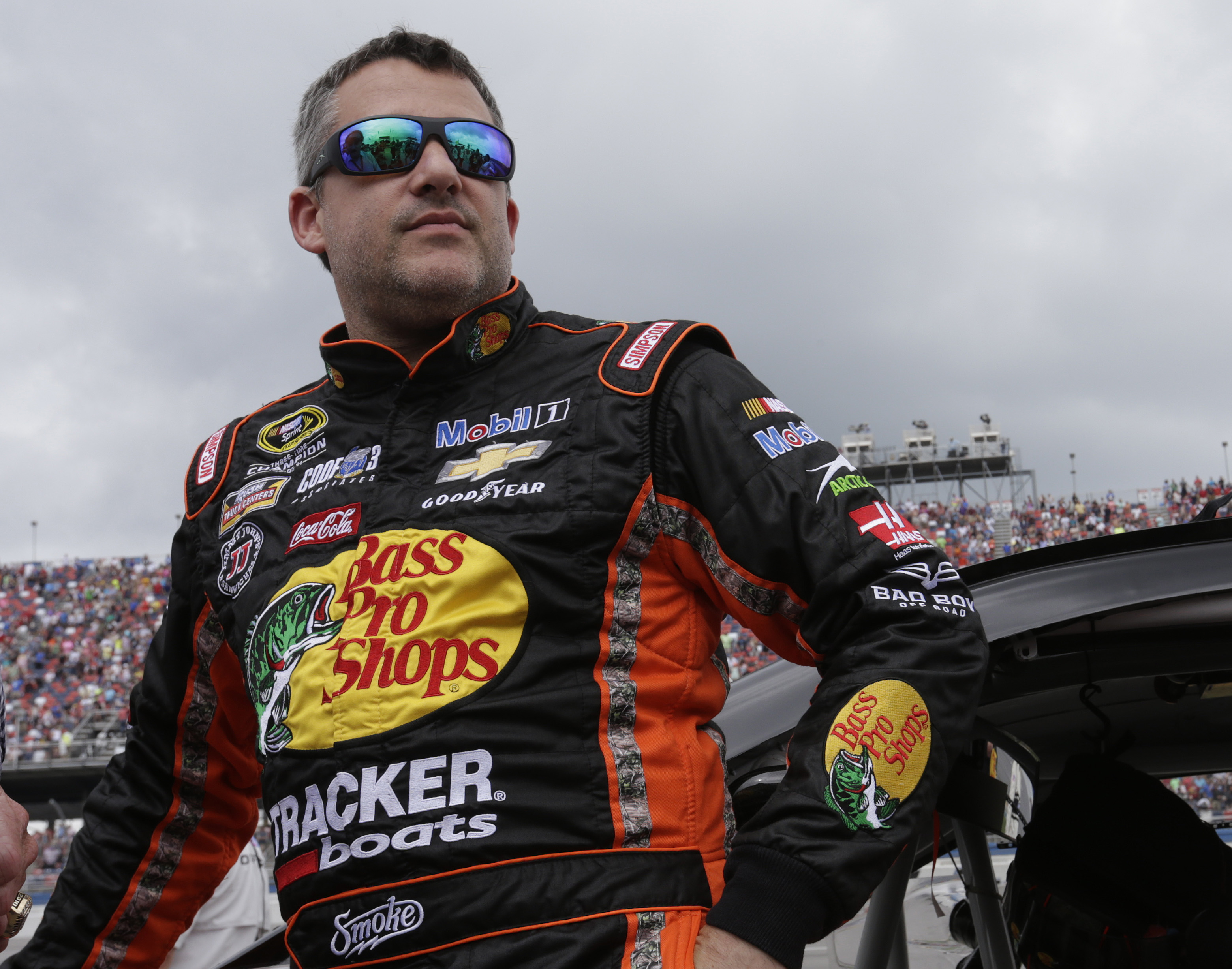 If this racer was in an IndyCar, he’d likely drop the hammer and get to the front of the field in no time.  Put him in a stock car and there’s no telling what amazing poise that’ll be on display at a track like Daytona or Sonoma.

Simply put, when Tony Stewart’s ready to race, he’s determined to drive that car to its limits in pursuit of victory on any given day.

To say the least, this is a man who loves racing to the point that he would likely compete in an event everyday no matter the venue or car.

For a racer who’s given so much to the sport and represents the enthusiastic fans who enjoy his candor and aggressive, bold racing style, it’s no wonder that this NASCAR Sprint Cup season is an emotional one.  Stewart will hang up his helmet at the conclusion of this season, closing out an impressive Cup career that spans 600 starts, 49 victories (including two Brickyard 400 wins), 184 top-fives, 304 top-10’s and 15 poles as of press time.

That said, the man affectionately known as “Smoke” insists that he won’t be leaving the sport and his fans entirely as he’ll tend to his duties with the Stewart-Haas Racing (SHR) organization. “My fans have always been loyal no matter what we put them through,” Stewart said.  “I think that was part of what made Sonoma so special.  It was a reward for those years of loyalty.  I want them to know I’ll still be around in an owner role.  I’m not leaving.”

Stewart will have his share of tasks to attend to with his ownership role over at SHR next year.  Before delving further into that position, he’s got one major task to complete: to close out his Cup career on a strong note.

Heading into the year, the 45-year-old Columbus, IN native was mired in somewhat of a struggle, managing a win at Dover in 2013 but slipping to points finishes of 29th, 25th, and 28th.  Hardly indicative of the effort put forth by Stewart and his No. 14 team, a major change was made when Mike Bugarewicz was named crew chief for Stewart’s effort.

After missing the first eight races recouping from injuries sustained in a dune buggy accident during the offseason outside of San Diego, Stewart returned to the driver’s seat at Richmond in April.  Starting 18th, the three-time NASCAR Sprint Cup champion dusted off the cobwebs en route to a 19th place finish.

Opting to follow the suggestions of doctors, Stewart started the race at Talladega but climbed out of the car for substitute driver Ty Dillon to complete the race.  Dillon assisted Stewart for the latter to be credited with an eighth place finish. Stewart looks to close out his Cup career on a high note. (Photo Credit: HHP/Rusty Jarrett )

No substitute drivers were needed for Stewart following Talladega as he compiled finishes of 12th at Kansas, 34th at Dover, 24th at Charlotte, 34th at Pocono, and seventh at Michigan.  Flashes of brilliance were displayed during that stretch as the No. 14 team showed a lot of fight and poise with fast cars, a determined crew, and a driver who was ready to return to Victory Lane.

That opportunity would finally surface when the Cup circuit came to Sonoma Raceway for some road course action in late June.  All weekend long, Stewart and his team showed their competition that they had the makings to be a legitimate race contender.

On Sunday, June 26th, a winless streak that exceeded three years finally came to an end for Stewart and company. Capitalizing on a well timed pit stop that took place just as a caution came out on the track, Stewart took the race lead and had to hold off hard charging Denny Hamlin in the waning laps.

Appropriately, Stewart’s win at Sonoma was symbolic of his racing demeanor which is to go all out, refuse to surrender, and most of all, to do what it takes to stand tall in the winner’s circle.

The final lap was surely dramatic as Stewart and Hamlin raced each other like it was Martinsville, using the chrome horn, trading paint, and most of all, thrilling the fans in the stands with a race that’s still reflected upon fondly to this day.

Heading into The Chute, Stewart tried his earnest to hold off Hamlin before the latter used the bump and run move to take over the lead.  Victory seemed to be in Hamlin’s sights before arriving to turn 11 when he ran the final corner just a bit harder than he wanted.

In the blink of an eye, Stewart took advantage of the opening, driving his Chevy to Hamlin’s inside, going wheel-to-wheel in the corner before driving off to the checkered flag for a truly popular and sentimental win. “Probably one of the best parts and one of the parts I’ll probably remember most about the race was before I got to victory lane and Denny leaning in there,” Stewart reflected.  “The first thing he says is, ‘I’m so damned proud of you.’ That meant the world to me.  I mean, I told him right after that, and I said, you know I had to do that, and he goes, I know.

So that just shows what kind of guys we’re racing with and the respect we all have for each other.  Sonoma was a game changer for sure.  To win at a place you’re going to for the last time, it means a bunch.  It’s special, trust me. Everyone feels really good about the year so far.  The next week at Daytona, I came to the garage and saw all the smiles and that was really cool. ”

Make no mistake that Stewart’s still the fiery competitor who’ll speak his mind and race by the golden rule.  His passion for the sport and pursuit of victories are some of the reasons why he’s earned the respect of not only the race fans but with his competitors throughout the years.

While Stewart notes that there’s been many good drivers that he’s raced over the years, it’s safe to say his peers have cited him as as their influence and inspiration for being a part of motorsports.

In classic Stewart candor, he mused at this situation reflecting on some of the current young superstars in NASCAR. “I remember Brian France telling me, and I’m only saying this because it’s the truth, he was right, and it was something that resonated,” Stewart said.  “He was like, you’re not bigger than the sport.  You’re a star in the sport, but there were stars before you and there’s stars coming after you.  With Jeff and I leaving, Chase Elliott is going to win a championship, and if the Wood Brothers keep going the way they are, Ryan Blaney is going to win a lot of races, too, and potentially win championships.

There’s plenty of stock coming along that’s got the opportunity to have fantastic finishes and make big names for themselves and 10 years down the road, Gordon and I will be like ‑‑ the new people watching the sport are going to be, who are these old guys?”

Undoubtedly, the sport progresses in cycles with different eras of racers and stars that establish their legacy in their period.  Ultimately, much like life, the future can draw inspiration from the past and present and it’s likely that a young racer will turn to Tony Stewart as a driving force for their career aspirations.

Originally a racer who made his mark in the open wheel ranks, Stewart quickly asserted himself as a stock car icon, taking to the tracks as rapidly as he stunned the NASCAR world when he qualified on the outside pole for the 1999 Daytona 500, his Cup debut.

No matter how this season concludes for Stewart, it’s safe to say that he has put together a NASCAR Hall of Fame career.  For the past 17 years, he’s risen to the occasion with four July triumphs at Daytona, two hometown Brickyard victories, and most importantly, hoisted the Cup championship trophy three times at Homestead-Miami Speedway.

Whether it’s his Joe Gibbs Racing period in which he delivered 33 wins for the “Coach” or his 16 victories as a driver/owner, his presence in the driver’s seat will be greatly missed when this season wraps up. Similar to Jeff Gordon in his final year, Stewart has been the recipient of some tributes at various stops in the Cup circuit.  Immortalized in Sonoma’s Hall of Fame and presented with a dirt track at Indianapolis Motor Speedway, it’s safe to say that Texas Motor Speedway’s track president Eddie Gossage has a memorable gift in the offing for Stewart.

While unknown as of now, no matter what surprise Gossage has lined up for Stewart, it’s safe to say that he’s ready for what awaits him.

“Eddie Gossage has been a really good friend for a long time,” Stewart said.  “Nothing Eddie does will surprise me nor will it surprise any of the race fans.”

Come November, we’ll see if this holds true.  Regardless of the presents that Stewart receives between now and season’s end, the best gift of all is knowing how this racer has helped with NASCAR’s evolution over the years.

Upon reflection, the sport as a whole has been for the better with Tony Stewart and the difference he’s made as a revered racing legend.  Come what may between this weekend at New Hampshire and Homestead-Miami; Stewart is a unique driver whose accomplishments are one of the greatest magnum opus for any level of motorsports.